Was the Collapse of the Gazan Tunnels Prophesied in Isaiah?

Home » Was the Collapse of the Gazan Tunnels Prophesied in Isaiah? 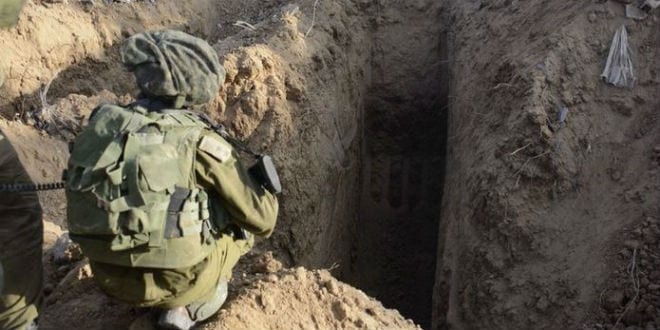 Some called it poetic justice but others, including a renowned rabbi, saw the hand of God when two weeks ago, a terror tunnel, dug to infiltrate and attack Israel from Gaza, collapsed, killing seven Hamas militants. Two more tunnels followed within a week, killing at least three more terrorists. And again, on Monday morning, Safa News Agency announced another tunnel collapse in Gaza, killing yet another terrorist. Some hypothesize that the entire network is close to collapse.

The week of the tunnel collapses was rainy and many, including the Hamas spokesman, blamed the weather. However, the Middle Eastern winter has been relatively mild and such conditions should have been reasonably anticipated by the tunnels’ engineers. The weather was not extreme and certainly did not seem to justify the collapse of multiple tunnels built from reinforced concrete.

Some have suggested that the tunnels’ collapse is due to an Egyptian initiative to pump seawater into the tunnels which Hamas dug leading into the Sinai for the purpose of smuggling in weapons and other goods. The flooding, commenced in September of 2015, destroyed a number of tunnels on Gaza’s southern border with Egypt. However, the tunnels which collapsed in recent weeks were located on Gaza’s northern border with Israel, and are unlikely to have been compromised by Egypt’s flooding many miles away.

Looking for a more logical explanation of this series of disasters, Palestinian Ma’an News asked Major General Yoav Mordechai, the Coordinator of Government Activities in the Territories (COGAT), whether Israel had a hand in the tunnel collapses. His answer was a mysterious, “God knows.”

Breaking Israel News took General Mordechai’s direction and went to the source, asking Rabbi Yitzchak Batsri, a noted Kabbalist and Torah scholar from Jerusalem, for a Torah perspective on these recent developments. He noted that this situation was precisely described by Isaiah in 2:19.

“And men shall go into the caves of the rocks, and into the holes of the earth, from before the terror of the LORD, and from the glory of His majesty, when He ariseth to shake mightily the earth.”

Answering his own question, Rabbi Batsri said,“No, they remain silent because they say since it is hidden underground, God does not see. And just as it is written in Isaiah, God brought his judgement to them, even there.”

The first tunnel that collapsed, killing seven, has a special reason to be the focus of divine wrath. Khalil Al-Hayeh, a senior Hamas official, revealed last Sunday that the tunnel was the same one that had been used to capture the body of IDF soldier Oron Shaul during the 2014 war. Hamas still holds Shaul’s body in a macabre form of blackmail.

Hamas has devoted massive energy and resources to its prized network of tunnels, appropriating much of the humanitarian aid from Europe intended to rebuild the civilian infrastructure and directing it instead into its terror tunnels, which it uses to infiltrate Israeli communities, kidnap Israeli soldiers and civilians, and sneak weapons into Israel.

Divine intervention notwithstanding, the tunnels from Gaza are a proven threat, and in the 2014 during Operation Protective Edge, Israel destroyed more than 30 tunnels, estimated to be about three-fourths of the total amount. Hamas began working to rebuild its network almost immediately and is today estimated to have reached nearly the number of tunnels it had previously to the operation.

In a separate moment of recent divine karma, several Palestinians were injured during a massive funeral procession for seven terrorists killed while attempting to carry out attacks against Israel. Thousands of Palestinians attended the event in Gaza City, with several hundred climbing onto the rooftops to get a better vantage point.  One roof gave way, spilling mourners onto the street.  It is clear from the video released by 0404 that several people were injured, but Palestinian authorities did not comment on the number of casualties.