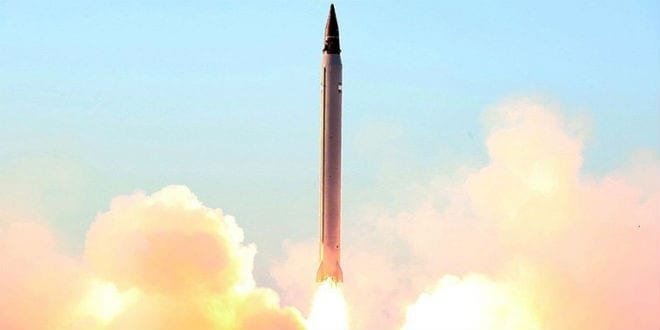 The Iranian Army’s Chief of Staff announced plans to upgrade their missile program, despite threats of renewed sanctions, and accompanied his statement with an implied threat to Israel.

Major General Ataollah Salehi was quoted by the Tasneem news agency as saying, “Iran’s future missile program will become more precise and stronger, and these are deterrent weapons that pose no threat to our neighbors and friends, but are against enemies.”

“They are rather a threat to the enemies of this establishment. Israel should fully realize the meaning of this concept,” he added.

Iran was prohibited from conducting ballistic missile tests under UN Security Council resolution 1929, passed five years ago. This was valid until the recent nuclear deal went into effect January 16, when another UN Security Council resolution, passed immediately after the nuclear deal, went into effect, The revised resolution calls upon Iran to refrain for up to eight years from any work on ballistic missiles designed to carry nuclear weapons.

When asked by Tasneem reporters about the UN resolution and the possibility of sanctions, he explained that Iran will not be bound to comply with those possible resolutions and the Armed Forces will not care about them.

In October, Iran tested an Emad medium range ballistic missile, which UN sanctions monitors confirmed is capable of carrying a nuclear warhead. This was followed one month later by yet another ballistic missile test, both of which were in direct violation of the UN resolution. Iran also publicized 14 underground “missile cities”.

In response to the missile tests, in December, US President Barack Obama threatened to implement new sanctions on Iran’s missile program. A day later Rouhani threatened that Tehran would accelerate the development of its arsenal. One day after Rouhani’s threat, President Obama announced he would delay the new sanctions.

The US has since implemented sanctions on 11 entities and individuals connected to the Iranian missile program, while, at the same time, lifting sanctions connected with Iran’s nuclear program.

This is not the first time a high-ranking Iranian official has taunted the US over missile restrictions. In response to the threats of US sanctions last month, General Hossein Salami, head of the Revolutionary Guards Corps, said to Fars new agency: