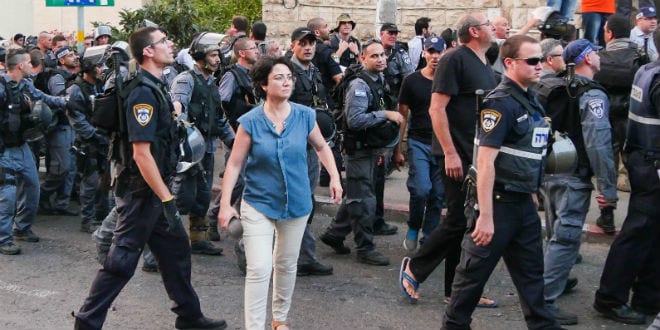 On Wednesday, the families met with Palestinian Authority President Mahmoud Abbas in his Ramallah office, just a few hours after a terror attack killed 19 year old Corporal Hadar Cohen and injured another soldier.

The Balad faction explained that “the MKs met with the families who asked to release their sons’ bodies for burial. The request has been forwarded to the Public Security Minister and he is dealing with it.”

Prime Minister Benjamin Netanyahu and Speaker of the Knesset, Yuli Edelstein, filed a joint complaint to the Knesset Ethics Committee on Thursday, saying the actions constituted incitement and “encouragement to murder.”

Netanyahu was unequivocally harsh when explaining his motives for filing the complaint.

“Members of Knesset who go to comfort the families of terrorists who murdered Israelis do not deserve to be in the Israeli Knesset. I have asked the Speaker of the Knesset to examine what steps can be taken against them,” Netanyahu said in a statement.

Edelstein was no less harsh in expressing his reasons for filing the complaint.

“It is inconceivable that at a time when innocent citizens are being slaughtered on the streets of Israel, these MKs go to console the families of the murderers and with unbelievable insolence dare to bring the families’ demands to the government,” Edelstein said. “I see this as a severe injury to the Israeli legislature and the State of Israel and hope that these actions will finally be noted by the judges of the High Court of Justice the next time they discuss an appeal against disqualifying unworthy candidates from running for office as lawmakers.”

Zoabi was charged last month with “insulting a public official”. The indictment came as a result of an incident last year in which she called Israeli Arab Policemen “traitors”. She was originally charged with the more serious crime of incitement, but was offered a plea bargain by the State Attorney. She has been charged with incitement several times, though never convicted, and there have been several attempts to remove her from the Knesset. She was arrested after taking part in the Gaza flotilla, and was on the MV Mava Marmara when IDF commandoes boarded it.