Russia to Israel: We Will Not Allow Transfer of Weapons to Hezbollah in Syria

Home » Russia to Israel: We Will Not Allow Transfer of Weapons to Hezbollah in Syria 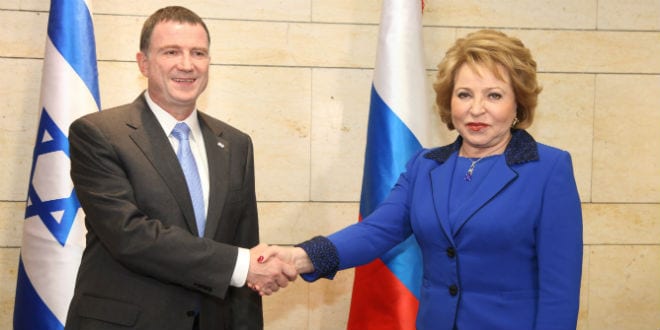 Knesset Speaker Edelstein and visiting Chairperson of the Federation Council of Russia Valentina Matviyenko both emphasized at a meeting at the Knesset earlier today the importance of continuing the joint Russian-Israeli mechanism in Syria.

The mechanism enhances communication between the Russian and Israeli militaries in Syria, allowing for both countries to conduct air operations without mishaps between them.

“Cooperation between the two countries is especially important in light of the concern that weapons will spread from Syria to Hezbollah,” Edelstein said. “It is no longer just an organization, but an enemy of Israel.”

Chairperson Matviyenko said that Russia would make sure that no such arms transfer would take place, but she avoided explicitly referencing Hezbollah.

“We are conducting dialogue with organizations in Syria, but we will not allow the transfer of weapons to an organization that brings about destruction and death,” said Matviyenko.

Matviyenko also commented on the mechanism established between Israel and Russia. “I am satisfied with the mechanism that was established in a meeting held over the summer between President Putin and Prime Minister Netanyahu regarding Syria,” added Matviyenko.

In addition, Matviyenko offered Russian guidance for a negotiated peace settlement between Israel and the Palestinians, but stressed that such a process could only be successful if achieved diplomatically, implying Russia’s opposition to any unilateral moves. The Palestinian Authority has previously taken unilateral steps in an attempt to create a state by gaining recognition in international bodies.

“The solution to the conflict must only come by way of diplomacy,” emphasized Matviyenko.

Knesset Speaker Edelstein acknowledged the potential Russian role in helping to move the peace process forward, though he expressed doubt over the success of such an initiative.

“While Russia can assist and promote the negotiations, it is strange that a country that is so far away from here needs to help while our closest neighbors do not help in the negotiations,” Edelstein remarked.