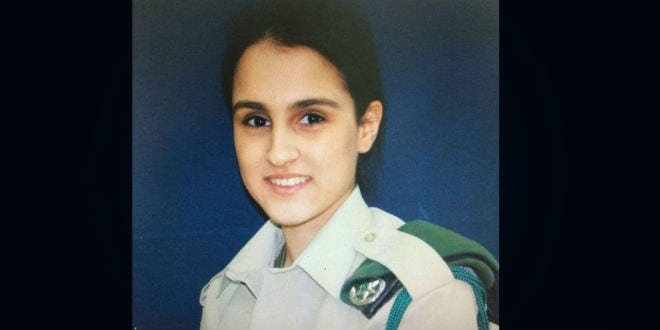 Border Police Cpl. Hadar Cohen, a 19-year-old officer serving in Jerusalem, succumbed to gunshot wounds on Wednesday after being critically injured in a terror attack in the Old City.

Three Palestinian terrorists attacked Cohen and several other members of her Border Police unit near the Damascus Gate with machine guns, knives, and pipe bombs on Wednesday afternoon. Another female police officer was stabbed and seriously wounded.

The Border Police unit had approached the assailants after noticing their suspicious behavior. As one of the officers requested ID cards, the terrorists pulled out guns and knives, stabbing one female officer and shooting Cohen in the head and neck.

Cohen and her partner were rushed to Hadassah University Medical Center, and Cohen was pronounced dead shortly after arrival. Her partner underwent emergency surgery.

Jerusalem mayor Nir Barkat said that the officers had prevented a much bigger attack. “I want to commend the police of Jerusalem,” he said at a press conference. “Their very swift response neutralized the threat, and the three terrorists were killed.”

“The message I have to the residents of Jerusalem and the people of Israel is: We will move on. We will continue with our lives, with our plans, and thank the police and security forces who did a respectable, good and professional job today,” Barkat added.

Cohen, who was from Or Yehudah in central Israel, had been deployed as a Border Police officer in Jerusalem for only two months. She was promoted to corporal after her death. She is survived by her parents, a brother, and a sister.

She is the 31st victim of the current wave of terror attacks plaguing Israel.