Jews, Christians, Arabs, and Druze Come Together in Prayer on the Israel-Syria Border

Home » Jews, Christians, Arabs, and Druze Come Together in Prayer on the Israel-Syria Border 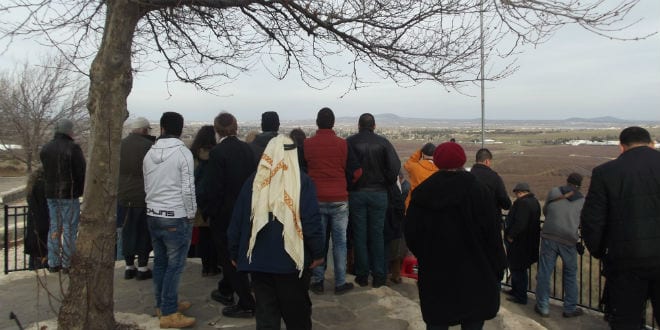 On Monday, Eliyahu Mclean led approximately 100 people in a multi-faith prayer and “Great Abrahamic Pulse Meditation” for the welfare of the Syrian people, at the border in the Golan Heights overlooking Syria. At the gathering was a remarkable mix of Muslims, Druze, Christians, and Jews.

The Arabs participants, coming from the West Bank, required special permits from the government to attend, but many more who did not receive Israeli government permission, attended virtually, watching on their cell phones. Others, including a few Gazans, joined the synchronized prayer from around the world, which had one million people who signed in to the website and via Facebook as participants .

The gathering was preceded by a tour of the Golan, led by Amir, a resident of Kibbutz Merom Hagolan, who gave an account of the unique history of the region. The tour stopped at the Shouting Hill in Majdal Shams, at the base of Mount Hermon, overlooking the border fence. The hilltop earned its name as the spot from which Druze living inside Israel would communicate with their relatives living on the Syrian side of the fence, by shouting or by megaphone.

In many ways, the coming together was unusual, a temporary bubble unique to this particular time and place. On the long bus ride from Jerusalem to Israel’s northern border, a resident from a stridently right-wing settlement sat next to an Arab community leader from Hebron and they proudly compared photos of their children. There were a few European peace activists in attendance, but they were playing the unfamiliar role of guests, rather than dominating the peace dialogue.

Perhaps the most encouraging note was the Arab parents from villages embroiled in violence who brought their young children in order to teach them a different way of encountering their Jewish neighbors. It was an amazing sight to see Arab children playing in the snow, learning to throw snowballs at Jews, rather than rocks or Molotov cocktails. One of the families belonged to a sheikh and former imam from East Jerusalem, who is hopefully encouraging his people to adopt a similar, less violent way of relating to Jews.

The ride to the prayer meet at the Mount Bental lookout seemed especially blessed as a rainbow encircled the sun. Concerns were raised, as a battle had broken out in Syria on that section of the border a few hours before the gathering. However, with no explanation or warning, the fighting stopped as the participants settled in to meditate on peace. After 15 minutes of intense meditation and/or prayer (each according to the dictates of his soul) led by James Twyman, the unexpected cry of a wolf signalled the end of the prayer. Twyman is a best-selling author and a self-proclaimed peace musician, who sang prayers of peace from the three Abrahamic religions.

Father Abuna Nael Abu Rahmoun, an Anglican priest from the Nazareth region, said to those in attendence, “We are here to pray to the one God that peace will come to Syria, the Middle East, and the holy land of Israel. I would like to see all of the Middle East as one country. As a Christian Arab, we all have relatives in Israel, in Syria, in Gaza.”

Ahbed el-Salaam Manasra, the son of Sheikh Ghassan Manasra and Sufi Muslim from Nazareth, co-organized the event. He was very pleased with the results. “We have meetings like this every month. This is not political. This is about prayer, which comes from the heart, something we can all understand. We can all pray for the people of Syria who are suffering,” he said.

Mclean, an Israeli Jew originally from California,  saw the event he had organized as a big success. “It is significant that this is taking place in Israel. This gathering could not take place a few hundred yards from here, in Syria. Israel is a guiding light  when it comes to global prayer,” he said.

Mclean has been working for 20 years for peace in a spiritual and religious context, entirely outside of any political framework. He was a close pupil of the late Rabbi Menachem Froman of Tekoa, who also advocated co-existence and a spiritual connection between the Abrahamic religions living in Israel.

There were only a few handfuls of people and no peace agreements were signed. But as Rabbi Schneur Zalman of Liadi, the founder of Chabad, said many years ago, “A little light dispels a lot of darkness.”