“To God be the Glory”, Says Ted Cruz After Sweeping Trump in Iowa Caucus

Home » “To God be the Glory”, Says Ted Cruz After Sweeping Trump in Iowa Caucus 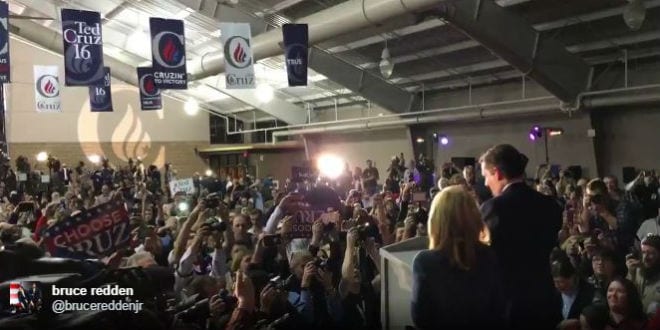 The surprising results of Monday’s Iowa caucuses are in, and Senator Ted Cruz is the clear Republican winner, upsetting Donald Trump’s frontrunner status in the race for the GOP presidential nomination.

“To God be the glory!” Cruz cried to a crowd of his supporters after winning 27.7 percent of the vote. “Tonight is a victory for courageous conservatives across Iowa and all across this great nation.”

Business magnate Donald Trump, whose brash style and plain talking had until now given him a lead on his Republican rivals, came in a far second with 24 percent of the vote, even though he is thought to be popular among evangelical voters, of which Iowa has many.

Cruz’s victory is likely due to a massive on-the-ground campaign effort conducted in Iowa over the past few months. Trump, whose confident media-heavy campaign has not focused particularly on the state, promised he would keep up the battle for the nomination, declaring to supporters that he would go on to “beat Hillary or Bernie or whoever the hell they throw up.”

Third in the race for the Republican nomination was Florida senator Marco Rubio, who took 23 percent of the vote – only one percent less than Trump.

The Democratic caucus was less decisive, giving Hillary Clinton, with 49.8 percent of the vote, only a miniscule lead over Bernie Sanders, who nabbed 49.6 percent. Sanders’ success came as somewhat of a surprise, as the self-described democratic socialist had very little mainstream support, financial or political, at the beginning of the race.

“What Iowa has begun tonight is a political revolution,” he told supporters at a campaign rally, most of whom represented a younger demographic.

The race will now move to New Hampshire, where Republican candidates John Kasich, Chris Christie, and Jeb Bush are already preparing the ground for next Tuesday’s primaries.