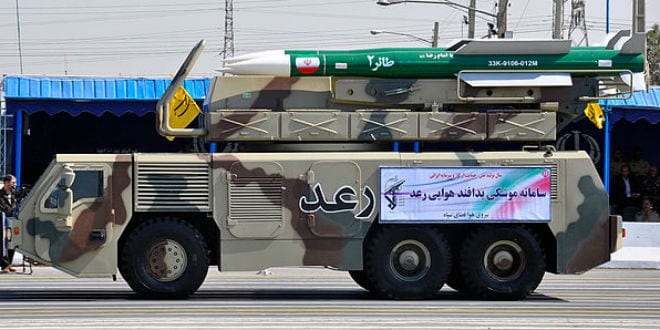 American efforts to curb Iran’s missile development may be backfiring: the Islamic Republic has announced that it is redoubling its program in spite of new US sanctions. Press TV reported over the weekend that Iran also has no intention of normalizing its relations with America.

Commander of the Iranian Revolutionary Guard Corps’ (IRGC) Aerospace Division Brigadier, General Amirali Hajizadeh, was quoted by Basij Press, saying, “Today, the enemies are bringing up the issue of missile-related sanctions and expecting us to back down. But, the IRGC’s reaction to this American demand will be aggressive.”

Hajizadeh accused the US of maintaining its hostile policies towards Iran, despite the nuclear accord which went into effect last month.

“Has the enemy abandoned its intentions for hostile moves? Does the (Islamic) Revolution have no problem anymore? That’s not the case,” he said.

“Our enemies, especially America, are still saying, ‘all options are on the table.’

“They are after certain goals in a number of fields, including the military and war, targeting the country’s security, culture and economy, because they have a problem with the essence of the establishment, and their problem is not nuclear,” he added.

He noted that American deterrents have no impact. “We doubled our activities and the American demands from Iran had an opposite result.”

Iran carried out ballistic missile tests in October and November on the Emad and Ghadr-110 missiles, which are said to be capable of carrying a nuclear warhead, in violation of UN Security Council Resolution 2231. Iran denies the missiles have this capability.

In response to the missile tests, the US enacted sanctions on 11 Iranian individuals and entities connected with the enterprise, taking effect after the nuclear accord lifted other sanctions against the Islamic Republic. Iran has slammed these new sanctions as “illegal”.

This is not the first time Iran has taunted America with its ballistic missile program. According to Israel National News, Iranian Defense Minister Hossein Dehqan said on January 18 that his country would unveil new, domestically-developed and constructed missiles in the near future, despite American complaints. Yet Iran maintains that its military might poses no threat to other countries and that its defense strategy is strictly one of deterrence.

The antipathy towards the US runs deep. “We have never trusted America and will never do so. Neither will we let a forging of relations with America,” Hajizadeh noted.

“As our late Imam (Khomeini) said, the relationship between Iran and America is the relation between the lamb and the wolf. We will never allow such a connection.”