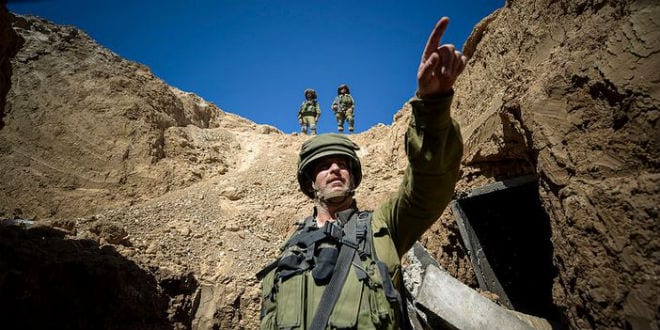 The head of the Eshkol Regional Council Gadi Yarkoni reassured area residents that the IDF is seriously addressing concerns of local Israelis who have complained of hearing sounds of tunnels being dug underneath their homes.

“The issue is not new and has concerned us since Operation Protective Edge,” Yarkoni wrote in his weekly letter to residents on Thursday, January 28. “It is important for me to note that we are in direct contact with the army regarding this matter and every complaint or suspicion of residents is being taken seriously and immediately passed on to the army.”

Yarkoni himself lost both legs to a Gaza mortar attack during Operation Protective Edge, which killed Kibbutz Nirim’s security coordinator, Ze’ev Etzion and his deputy, Shahar Melamed, as the three men were repairing damaged electrical wires. A year after the attack, Yarkoni went on to win the mayoral election for the Eshkol Regional Council.

According to Yarkoni, the IDF are checking out the complaints in the field but investigations until now have not revealed any findings. “Along with this, the fear is clear and understandable and it strengthens the immediate need to advance the establishment of a barrier along the border that will provide security and a defensive response to the tunnels’ threat.”

Earlier this week, a Hamas attack tunnel collapsed in Gaza, killing seven Hamas terrorists that were working on the tunnel. Hamas said that the tunnel near the Israeli border had collapsed after the heavy rain on Tuesday night.

During Operation Protective Edge, which sought to stop Gaza rockets and mortar attacks and took place nearly a year and a half ago, Israel was able to destroy 32 cross-border tunnels. During the war, Hamas terrorists, armed with weapons and explosives, infiltrated Israel through the terror tunnels several times, aiming to kill soldiers and civilians alike.

A few months after the Gaza war, residents of Kibbutz Nirim, where Yarkoni is from, contracted a private company to check for underground digging in the area after kibbutz members had complained of hearing digging noises in May 2015.  The private company verified that a tunnel had indeed been constructed, which prompted an army inquiry into the matter last year.

“We are again demanding from the government at every opportunity not to delay this issue and to advance the building of the barrier immediately,” concluded Yarkoni in his letter.