Trump’s No Show at Debate is a Winner

Home » Trump’s No Show at Debate is a Winner 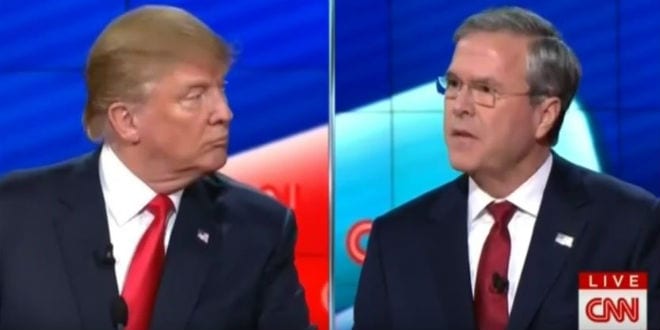 The Republicans had their final debate  before the Iowa primaries on Thursday night, with eight candidates sparring on stage, but the “Elephant” noticeably absent from the event.

Donald Trump, the front-runner in the Republican primaries, was not present to answer questions or trade barbs, though his platform and personal style were central issues addressed by the other candidates. Trump withdrew from the debate after Fox News refused to replace Megyn Kelly as of the three moderators of the debate. Trump accused Kelly of bias.

Despite his protest, Trump is drawn to the spotlight like a moth, and held an event for veterans less than three miles away from the debate that drew almost as much national attention. He referred to his boycotting the debate by saying, “When you’re treated badly, you have to stick up for your rights.”

Kelly addressed the issue at the outset by asking Texas Senator Ted Cruz, number two in the polls, about “the elephant not in the room”. His answer was on point.

“I’m a maniac and everyone on this stage is stupid, fat and ugly, and Ben (Carson), you’re a terrible surgeon,” he said. “Now that we’ve gotten the Donald Trump portion out of the way…”

Marco Rubio was almost complimentary when referring to Trump, saying, “He’s an entertaining guy, he’s the greatest show on earth”.

Florida Governor, Jeb Bush, also addressed the Trump issue. “I kind of miss Donald Trump. He was a little teddy bear to me,” Bush said. “Everybody else was in the witness protection program when I went after him.”

After getting Trump bashing out of the way, real issues were discussed but in a markedly less bombastic and far more civil manner than at previous republican events. “The exchanges were much more civil. You didn’t have any gratuitous insults,” Cruz commented on Fox News after the debate.

Rubio and Cruz were confronted with videos presenting their contradictory statements about immigration and failed to produce convincing responses. Cruz actually elicited boos from the audience when he tried to sneak more time from the moderators.

Bush pounced on the opportunity, saying that Rubio had “cut and run”, and announcing that he stands by his commitment to immigration reform.

Rubio did take a strong stand when he stood by his pledge to shut down mosques where radicalization was being advocated and stated he would tear up the nuclear deal with Iran on his first day in office.

Fox News made a statement to The Hollywood Reporter revealing perhaps another motive for Trump’s absence.

“Trump offered to appear at the debate upon the condition that FOX News contribute $5 million to his charities. We explained that was not possible and we could not engage in a quid pro quo, nor could any money change hands for any reason.”

Trump’s parallel event purportedly raised $6 million for veteran’s charities. So, in many ways and in his own inimical manner, and despite (or perhaps due to) his absence, Trump came out the winner in this final debate.