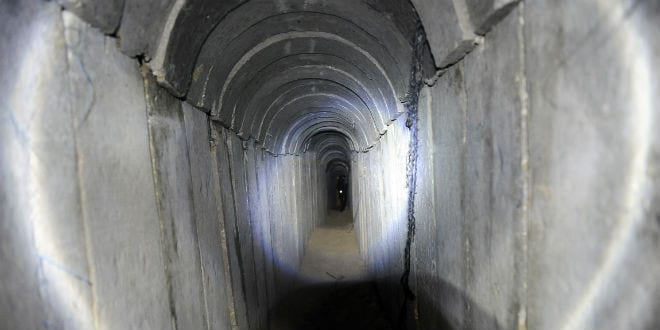 After denying Palestinian media reports that a Gaza terror tunnel on the Gaza-Israel border had collapsed, killing several workers, the terrorist organization Hamas admitted on Wednesday that at least eight Palestinian diggers had been killed in the collapse, caused by this week’s heavy rains.

Intense rainstorms with strong winds and freezing temperatures this past week caused the collapse of the tunnel, which killed at least eight tunnel diggers, said Israel Radio, according to Palestinian sources. The collapse occurred in the Al-Tuffah neighborhood in Gaza City.

The soft sand in the region allows for easy digging, but when mixed with heavy rains, the land becomes intensely muddy, weakening the stability of the tunnels. Ultimately, the recent rains turned one tunnel into a grave for several Palestinian workers.

The “terror tunnels”, dug beneath the Gaza border into Israeli territory, have been the source of a range of terrorist activities by Hamas in recent years: the abduction of IDF soldiers, sneak attacks on unsuspecting communities near the Gaza border, the killing of Israeli civilians, and the smuggling and storage of various weaponry.

Continuing its “blame Israel” rhetoric, Hamas held the Jewish state accountable for the tunnel collapse and men’s deaths, claiming that Israel opened dams intending to flood Gaza. Israel quickly rejected this ludicrous claim, made even more ridiculous by the fact that Israel simply has no dams in the area.

The Israeli military estimates that Hamas has spent nearly $90 million – much of it aid money given to the Palestinian Authority by foreign governments and NGOs – on the construction of over three dozen illegal tunnels.

The money, however, goes towards supplies rather than wages; the average worker, who spends 8-12 hours digging every day, earns a maximum of $300 each month.

The news about this tunnel gives further credence to IDF statements which warn that Hamas is rearming itself and rebuilding its tunnel structure, a third of which was destroyed by the IDF after 2014’s Operation Protective Edge.