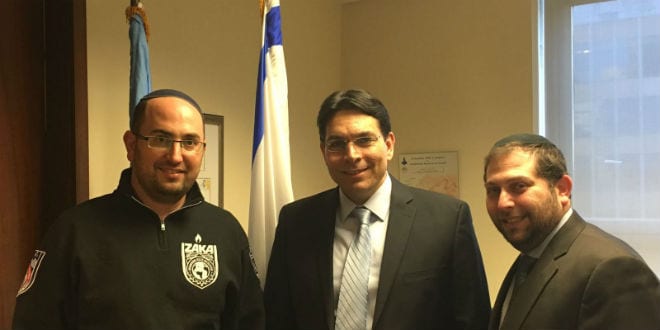 This upgrade in status will allow ZAKA to actively participate in official UN meetings and conferences concerning how best to deal with mass casualty and emergency events worldwide, areas in which the organization is expert. ZAKA will also join in the development of international protocols for disaster relief.

The new status is hard-won. ZAKA has been repeatedly denied consultative status by the UN in recent years, and, to add insult to injury, six months ago the committee granted consultative status to the Palestinian Return Center, a Hamas-affiliated organization which promotes anti-Israel propaganda in Europe.

The ZAKA rejection came even after clarifying that ZAKA volunteers help all in need, often providing Palestinian victims in traffic accidents and other mass casualty incidents in Israel with care.

“With the unfortunate increase in international terror attacks and natural disasters, we are grateful and honored that the UN has recognized ZAKA as the premiere organization for saving lives and honoring the dead worldwide,” stated David Rose,

ZAKA International Director, to Breaking Israel News. “Through this coveted status, in two weeks’ time ZAKA will be sitting in a special meeting with UN representatives sharing our hard-earned knowledge on emergency actions to take during the first four days after an earthquake.”

ZAKA has proved its dedication to helping people in any crisis, irrespective of religion, race, creed, color or gender, through their professional search and rescue work. They have assisted in saving and finding victims and organizing disaster sites at the scenes of dozens of catastrophes, such as the terror attack in Paris, the tsunami in Thailand, Hurricane Katrina in New Orleans, the earthquake in Haiti, and more.

In 2005, the UN recognized ZAKA as an international humanitarian volunteer organization following years of outstanding work dealing with mass casualty and emergency situations in Israel and around the world. “We were grateful for that somewhat symbolic honor,” Rose explained to Breaking Israel News. “It made it easier for us to approach countries in need. For example, after the Chabad house terror attack in Mumbai, India, we immediately contacted the ambassador to India to help. Saying that we are a UN-recognized organization opened the door for being accepted to help.”

The UN decision is a significant diplomatic victory for Israel which took four years of determination on the part of ZAKA representatives and Israeli government officials. Deputy Foreign Minister Tzippy Hotovely and the Foreign Ministry Director-General Dr. Dore Gold made the granting of ZAKA advisory status by the UN a top diplomatic endeavor for the state of Israel.

Demonstrating the seriousness of the matter, Hotevely personally met with several UN representatives. ZAKA International Rescue Unit Mati Goldstein traveled to New York in order to explain to each representative the scope of ZAKA’s international activities during mass casualty incidents, including terror attacks and natural disasters. The Chief Rabbi of Russia, Berele Lazar, is credited with influencing the Foreign Office in Russia to support the decision.

Following ZAKA’s upgraded UN status, Hotovely made a personal congratulatory call to ZAKA Founder and Chairman Yehuda Meshi-Zahav, saying, “ZAKA is an important organization that does holy work every day of the year, and a group like this should certainly be part of an international body such as the UN.”

In a ZAKA press release, Meshi-Zahav praised the move: “It is a great honor for the State of Israel in general and the ZAKA organization and its volunteers in particular that the UN recognizes and appreciates the unique sacred mission that we do, regardless of religion, race or creed.”

“The professional, humanitarian efforts of ZAKA around the globe, combined with the complex and sensitive diplomatic efforts of the UN delegation, have resulted in the official UN recognition of ZAKA,” he continued.

Meshi-Zahav added that, with the coveted recognition, ZAKA will expand its international search, rescue and recovery missions, working in continued close cooperation with international emergency forces.