Obama: I Cannot Imagine a Greater Expression of Christianity Than to Say, “I, Too, Am a Jew”

Home » Obama: I Cannot Imagine a Greater Expression of Christianity Than to Say, “I, Too, Am a Jew” 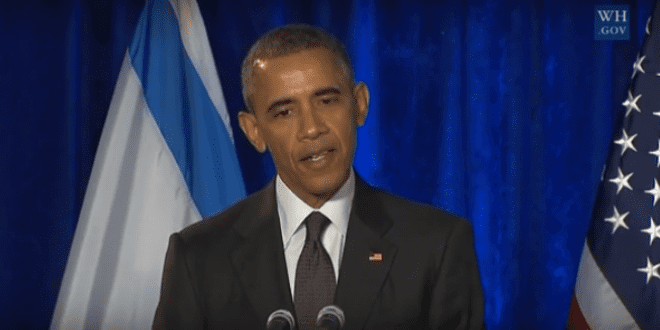 US President Barack Obama attended a ceremony at Washington’s Israeli Embassy on Wednesday night to celebrate the lives of four people honored by the State of Israel as Righteous Among the Nations on International Holocaust Remembrance Day. The ceremony, which recognized the actions of individuals who saved Jews during the Holocaust, was the first of its kind to be held in the US, and the first therefore to be attended by a sitting US president.

In his remarks at the event, Obama stressed the close relationship between Israel and the US despite recent disharmony between the nations over the Iranian nuclear deal, which was strongly opposed by Israeli Prime Minister Benjamin Netanyahu.

Obama’s rhetoric attempted to express his respect for the Jewish people, both as a nation and as Christianity’s spiritual forebearers.

“We are all Jews,” he said, echoing the famous statement of Master Sergeant Roddie Edmonds, an American officer who refused to betray the Jewish soldiers in his command when a Nazi officer demanded to know which of the over 1,000 American troops held in a German POW camp were Jews. Edmonds, whose actions saved over 200 Jewish lives, was one of those honored at Wednesday’s ceremony.

Obama added that the heroic words of the officer were an “instructive lesson” for Christians, saying, “I cannot imagine a greater expression of Christianity than to say, ‘I, too, am a Jew.’”

Without touching on the sensitive topic of the recent Iranian accords, which Netanyahu has said would be disastrous for Israel, Obama insisted that the US would “stand up forcefully and proudly in defense of our ally, in defense of our friend, in defense of the Jewish state” when global voices veered from “criticism of a particular Israeli policy” to “an unjust denial of Israel’s right to exist” or when Israel faced terrorism.

He went further, highlighting his administration’s work against the current worldwide rise in anti-Semitism and encouraging other nations to take up the battle, even going so far as to say that for other countries to fight anti-Semitism was “essential” for “maintaining a healthy relationship” with the US.

Despite his words of friendship and solidarity with the Jewish state, some lawmakers expressed skepticism. Senate Foreign Affairs Committee Chairman Bob Corker (R-Tenn) and Sen. Lamar Alexander (R-Tenn), two of the strongest opponents of the Iranian nuclear deal, attended the ceremony to pay tribute to Tennessee native Edmonds. Though he felt that “the president spoke honestly and from his heart,” Alexander said told the Times of Israel that “as for improving the administration’s relationship with Israel — that’s up to President Obama and the State of Israel.”

While admitting that there remain significant policy differences between the two, Alexander said that the US-Israel relationship was “bigger than any one president.”