American Jewish Leader Urges Jews to Get Out of America

Home » American Jewish Leader Urges Jews to Get Out of America 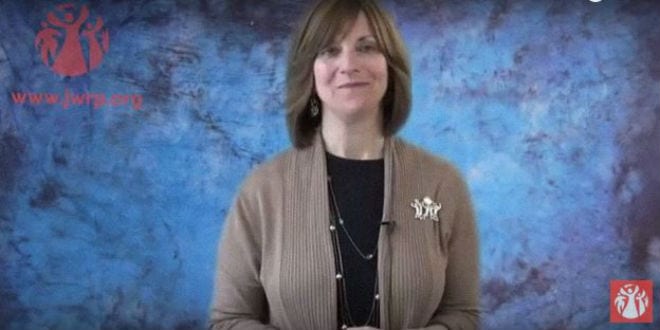 Lori Palatnik, a leader in the American Jewish community, has just released a video in which she calls for American Jews to move to Israel, in fulfillment of the Biblical prophecy about the ingathering of the exiles.  At the End of Days, Palatnik teaches, “Ultimately, the Jews are all going to move to Israel.”

Palatnik is a Jewish educator, author and speaker. In March 2015, Hadassah, the prestigious Jewish women’s organization, named her among the “Most Outstanding Jewish American Women of Our Time.”

The 3-minute video, first published on January 23, 2016, opens with a reference to 9/11 and “the scary prophets that talked about what happens at the End of Days.” In an interview with Breaking Israel News, Palatnik confirmed that she was referring to the Books of Isaiah, Jeremiah and Zechariah. More specifically, she spoke about the events of September 11, 2001 as a clear fulfillment of prophecy.

And I will shew wonders in the heavens and in the earth, blood, and fire, and pillars of smoke. (Joel 3:3)

Palatnik reflected on Biblical prophecy coming true in our lifetime. “After 9/11 was a huge wakeup call,” she told Breaking Israel News. “When they talk about pillars of smoke like date palms, it sounds like nuclear holocaust. When they were writing this, did anyone understand what they were talking about?”

Her warning to American Jews is controversial. Palatnik told Breaking Israel News that, although this is the first time she’s said it publicly, “I speak about this all the time in my community. I talk that way to the people around me. I say, ‘Don’t get fooled. This is coming down. This is happening.’”

Palatnik is referring to the dangers of increased anti-Semitism. “There’s been a build up. Anti-Semitism is worse than before the Holocaust. In Paris you can’t wear a kippah on the street. Is that what we’re waiting for?” she asked.

Millions of American Jews do not yet see the danger about which Palatnik is speaking. Even if they believe that ultimately they will end up in Israel, concerns about making the adjustment are common. Additionally, most American Jews think they still have plenty of time.

Palatnik disagrees. “I think it won’t be long,” she warned. “As the winds of anti-Semitism and politics change, your child having a hard time adjusting to an Israeli school will be very minor compared to the need to get out, get out now!”

Acknowledging the difficulty some Jews will have adjusting to life in Israel, Palatnik quoted the rabbinic commentary on Proverbs 13:24 which teaches that, “God has given the Jewish people three gifts, but all of them must be acquired through suffering. These are: Torah, the Land of Israel and the World to Come.”

The way she and her husband raised their own children is an echo of her deeply-held beliefs, she said. “My kids have been told since they were very young, ‘America is not your home. We’re here doing a job for the Jewish people. Israel your home.’ I hope and pray that we’ll all end up there.”

Palatnik addressed the issue of the current dangers in Israel in her video presentation by saying, “It’s not that Jews there are going to be immune to any tragedy, but it’s clear, and I checked it with different rabbis, that you’ll be safer in Israel than anywhere else in the world.”

Asked to elaborate on this concern by Breaking Israel News, she responded, “I am a firm believer that God runs the world and He already knows when it’s your time. To die as a Jew in Israel, it has meaning. Does our life and death have meaning? I don’t want a meaningless death.”

Critics of Palatnik’s message claim that it’s wrong to scare Jews into moving to Israel. They feel that people should come to Israel for something, not because they are running away from something. In response, Palatnik told Breaking Israel News, “I strongly believe that people should make aliyah (immigrate to Israel) by choice. But you can’t stand by. Things are getting worse and worse.

“I’m not a prophetess, but the Almighty is starting to make it uncomfortable, because being comfortable seems to work against us. I don’t want to wait for that. I don’t think anyone should wait until they’re running for their lives.