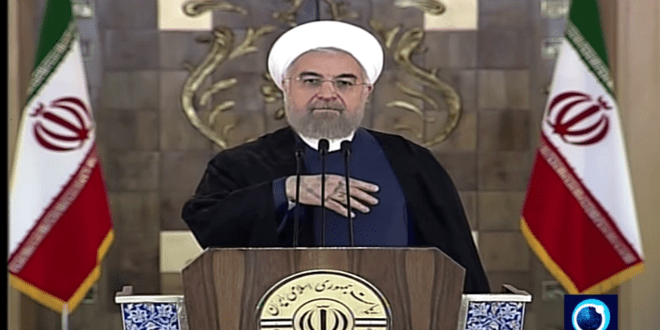 Iranian President Hassan Rouhani has figured out who is at fault for his country’s troubled relationship with the US, and it is Israel. Speaking on Wednesday, Haaretz reported, Rouhani claimed that the US was influenced by the anti-Iran “Zionist lobby”, which was “very influential” in America.

Rouhani added that improving the US-Iran relationship is in America’s best interests, as without Iran, the US will never succeed in its efforts to stabilize the region.

Rouhani is in Europe, his first official visit to the continent. His itinerary includes Italy and France, where he is looking to improve the Islamic Republic’s image following last year’s nuclear accords and the recent lifting of sanctions.

During his remarks, he took a swipe at Saudi Arabia, Iran’s rival power in the Middle East. He ridiculed Saudi Arabia’s military efforts to suppress rebel Houthi forces in Yemen, saying they were a failure and source of frustration.

“It is angry because of its failures,” Rouhani said. “Saudi Arabia has been bombing the impoverished people of Yemen for 10 months and has not achieved anything. It has not had any victory and is hated more than ever by the Yemeni people.”

Relations between Sunni Saudi Arabia and Shi’ite Iran, never easy, have been growing increasingly tense since Saudi Arabia executed a Shi’ite cleric earlier this month, prompting ties to be severed.

Meanwhile, regarding the US, Rouhani put the ball in America’s court, urging the Western power to drop its “hostile” attitude towards Iran in the interest of cooperation in the region.

Speaking through a translator, he said, “The Americans know very well that when it comes to important regional issues they cannot achieve anything without Iran’s influence or say.”

Rouhani contrasted European businesses’ eagerness to make ties with Iran now that sanctions have been lifted with ongoing US reticence.

“It’s possible that Iran and the United States might have friendly relations. But the key to that is in Washington’s hands, not Tehran’s,” he said. “I would like to see the Americans set aside their hostility and chose another way, but inside the US there are some problems, there is no unified voice.” He ultimately blamed Israel’s influence in America for this discord.

While sanctions were lifted as part of the nuclear deal signed last summer by Iran and the P5+1 nations, the US opted to maintain some sanctions, accusing Iran of financially supporting terrorist organizations.

Rouhani dismissed these accusations. “It is clear that Iran is a country opposed to terrorism and a country that fights terrorism,” he said.

Iran finds itself in opposition to Western powers and their allies on most issues, such as the Syrian civil war in which Tehran supports Bashar Assad. However, when it comes to the Islamic State (ISIS), Iran is aligned with Western interests in combating the jihadist force.