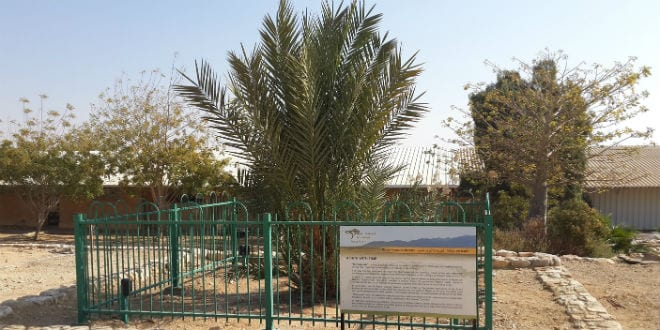 Methuselah is considered to have been the oldest living man in the Hebrew bible, reaching the esteemed age of 969. It is only appropriate, then, that a date palm that sprouted from a 2,000-year-old seed at southern Israel’s Arava Institute for Environmental Studies (AIES) carries the same name.

Dr. Elaine Solowey, director of the Center for Sustainable Agriculture at AIES and an expert in crops appropriate for arid lands, was very skeptical about the possibility of taking ancient seeds and producing something viable from them. With only six seeds, recovered by the Louis L. Borick Natural Medicine Research Center of the Hadassah Medical Organization from excavations at the Masada fortification in the 1960s, she set out to cultivate a Judean date palm. While native to Israel and the area surrounding it, the Judean date palm is a species that had not been seen there for more than a millennium.

Seven years ago, a male date palm sprouted from one of those ancient seeds, leaving many in awe of what was thought to be a botanically impossible feat.

“It has become a major attraction here at the institute,” AIES Executive Director David Lehrer said regarding the now-mature Methuselah at its home on Kibbutz Ketura. Lehrer explained that AIES’s dream is to reintroduce the Judean date palm to the State of Israel as a valuable crop and for its unique medicinal properties.

This initiative and other AIES agricultural projects are made possible by the institute’s partnership with Jewish National Fund (JNF). Together, JNF and AIES are turning the world’s attention to the knowledge and research coming out of the Negev desert, with a focus on the fields of hyper-arid nature conservation and water management.

Methuselah is actually part of a larger project organized by Solowey, and with this success she plans to create a center for the study of ancient, extinct, and endangered seeds. “We want to make sure that endangered plant species don’t disappear from Israel’s landscape,” said Lehrer.

“We are looking for good uses for native plants which are under threat,” he added, emphasizing the plants’ medicinal qualities.

It is fitting to highlight Methuselah’s rebirth in light of the Jewish holiday of Tu B’Shvat, Israel’s New Year of the trees, which was celebrated Jan. 24. Beyond the fact that dates are one of the “seven species” that are customarily consumed on this holiday, the story of the modern-day Methuselah provides an opportunity to reconnect with nature in a thoughtful and creative way.

“In some ways, nature is under threat,” Lehrer said. “It’s important that human beings remember that our role in this world is to continue to nurture nature and to ‘take care of the garden.’ The bible tells us that if we ruin it, there won’t be anyone to come after us and fix it.”