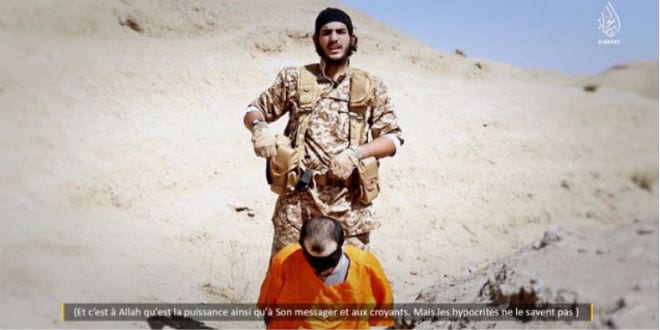 The Islamic State has released a disturbing new propaganda video showing what appears to be footage of the ISIS terrorists who carried out the deadly November Paris attacks. The footage was apparently filmed prior to the massacre which killed 130, and features the nine terrorists when they were still in Syria and Iraq, “training” by executing and beheading enemies of ISIS.

The chilling 17-minute video states that ISIS plans to attack Britain and other European targets with “Paris-style attacks”.

The video, entitled “Kill Them Where You Find Them”, was released on Sunday by ISIS’s Al-Hayat Media Center, and features the characteristic high production values the world has come to expect from a terror group which has learned to use social media to its great advantage.

If the identities of the terrorists in the video are verified by intelligence forces, it would provide concrete evidence that the group which perpetrated the coordinated attack in Paris had not only been influenced by ISIS ideology but had actually been sent by the terrorist state from its territory in Syria and Iraq.

The video shows the nine assailants on camera, one by one, and seems to have been shot near Raqqa, Syria. It opens with news footage of the devastating Paris attacks, including scenes of suspected ringleader Abdelhamid Abaaoud in a shootout with French police.

A voice identifying itself as Abaaoud’s then addresses the US-led coalition forces currently attacking ISIS territory in Iraq and Syria with airstrikes, threatening more terror attacks in retaliation if they continue to target ISIS.

A voice introducing the assailants narrates, “These are the last messages of the nine lions of the caliphate who were mobilized from their lairs to make a whole country, France, get down on its knees,” according to a report in Reuters.

Four of the nine assailants, identified by name, address the camera directly while killing victims. Bilal Hadfi, who is believed to be one of three assailants who attacked the Stade de France, is shown with a prisoner kneeling at his feet, whom Hadfi then beheads.

Samy Amimour, a French national, is shown holding the severed head of his victim, and Omar Ismail Mostefai appears holding another captive by the neck. Both of the men detonated suicide vests inside the Bataclan Theater during the Paris attacks.

Ringleader Abaaoud appears in a room with the ISIS flag and threatens the world in French. “We will not stop fighting you in every part of the world regardless of whether you are on a tourism trip or a work trip,” he announces. “So expect more. Expect a mujahid to show up to kill you.”