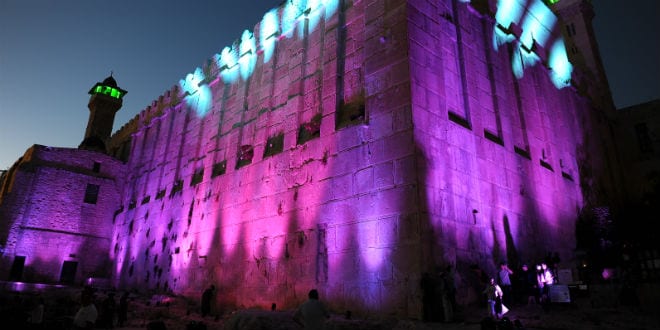 Friday morning, Israel security forces launched an operation to evict a group of 200 Jewish settlers who had moved into houses they purchased in Hebron near the Cave of the Patriarchs. Clashes broke out on Thursday between the settlers and Arabs when they moved into the two empty residential properties in the Avraham Avinu neighborhood. The IDF used crowd control measures (tear gas and stun grenades) to quell the violence.

The settlers pried open the doors to enter, filming the process in order to be able to prove that the houses were indeed entirely vacant when they moved in.

In a statement to the press, the settlers said, “We are meriting to redeem two additional buildings in Hebron, the city of the fathers, Beit Rachel and Beit Leah, and in doing so join a long line of redeemers of the land of Israel who paid in full buying houses and land, starting from our forefather Abraham.” They told the press, “This is an appropriate response to the terrible wave of terrorism that has been ongoing for nearly half a year in Israel, in which Jews are killed and wounded every day.”

The mayor of Kiryat Arba, Malachi Levinger , submitted documents to military officials confirming the purchase, and the Civil Administration was reportedly working to verify the documents’ authenticity. The settlers claimed they had bought the properties a few days earlier in a secret deal.

Land deals in which Arabs sell property to Jews are usually done in a clandestine manner since the Arabs are frequently threatened or attacked by Arab groups who oppose such sales. Recently, Ezra Nawi, an activist for the left-wing NGO Ta’ayush, was filmed bragging about doing so, and the video was aired on Channel 2.  It was then revealed that B’Tselem, Breaking the Silence and Rabbis for Human Rights,  paid Nawi for doing so, claiming it was a valid manner to prevent the transfer of land to Jews.

Defense Minister Moshe Ya’alon (Likud) responded to the criticism in a press statement, saying that “Israel has rule of law, and I have no intention of compromising when the law is violated. In the case of the houses in Hebron, the law was flagrantly violated. In order to enter the home, there are several legal actions that must be taken, none of which were taken. Thus, the intruders were evicted.” At present, the government does not allow additional Jews to move into Hebron or buy additional properties and as a rule denies such requests.

The Hebron Jewish community spokesperson responded to Ya’alon by issuing a statement saying, “”The problem is that the government is conducting a policy in Hebron of anti-Jewish discrimination, and preventing Jews from any possibility to build or buy.”

“In Hebron there is absolutely no possibility for Jews to develop the community due to racist reasons,” said the Hebron spokesperson in response to Ya’alon. “Then when Jews succeed in buying a home, they throw them out like dogs. Unfortunately, that’s the bitter truth.”

“At a time when Arabs are building without limitations, Jews are discriminated against in a harsh manner, and are not allowed to realize their basic human rights like the right to purchase and build, which were taken as foregone conclusions for hundreds of years.”

“The eviction is a draconian and anti-democratic measure, it is a moral, Zionist and security bankruptcy, and gives a tailwind to terror,” concluded the Hebron council. “We demand that the government do some self-examination and change its hostile and anti-Zionist policies in Hebron and in the entire country.”