Trump Announces that in a First for the US, He Would Recognize Israeli Sovereignty Over Jerusalem

Home » Trump Announces that in a First for the US, He Would Recognize Israeli Sovereignty Over Jerusalem 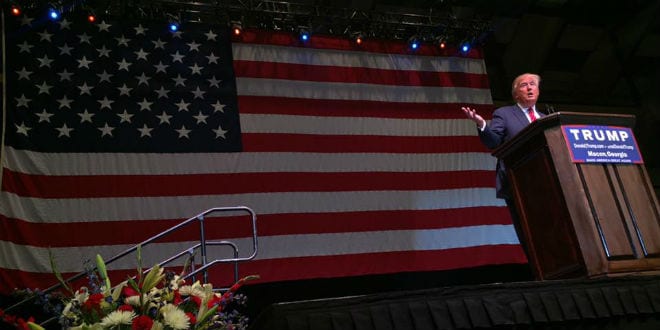 Republican presidential frontrunner Donald Trump has vowed that if elected, he will move the American Embassy from Tel Aviv to Jerusalem. Such a move would essentially mean recognition of Jerusalem as Israel’s capital, something which the US has, until now, refused to do.

It was an apparent change of heart for Trump, who in December earned boos from members of an influential conservative Jewish group when he refused to recognize Jerusalem as the capital city of Israel, instead saying that he preferred not to enter Israeli-Palestinian peace talks with a firm stance on the matter.

“You can’t go in with the attitude ‘we’re gonna shove it down your,’ you’ve got to go in and get it and do and do it nicely, so that everybody’s happy,” he said at the time.

However, when CBN interviewer David Brody asked Trump if he agreed with rival Republican candidates Ted Cruz and Marco Rubio, who have both said that they would move the embassy to Jerusalem, Trump confidently made the same pledge.

The question of American recognition of Israeli sovereignty over Jerusalem has been a sore point between the two countries. Last year, the US Supreme Court backed President Barack Obama’s refusal to allow Jerusalem-born Americans to write “Israel” as their country of birth on passports. The decision was understood by Israel as a categorical denial of Jerusalem as legally and rightfully belonging to the Jewish State.

A Trump presidency would presumably reverse that decision, putting America’s full diplomatic and political support behind Jerusalem as an inviolable part of Israel.