Conference Takes Aim at Efforts to Turn Evangelicals Against Israel 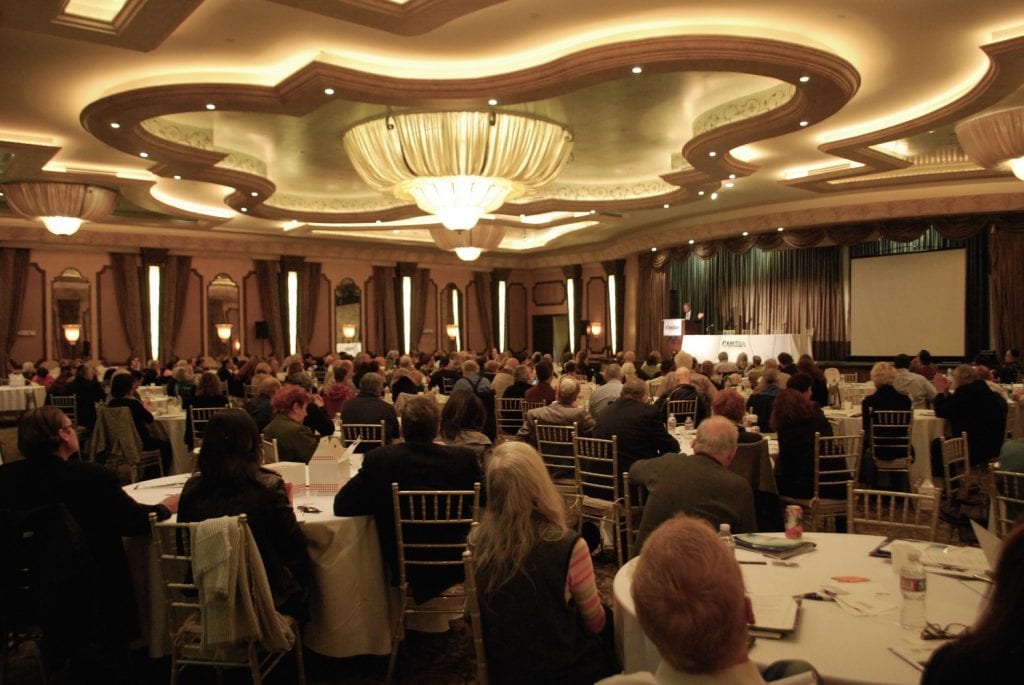 Immanuel Paul looked somewhat out of place in a leather jacket and priest’s collar, seated by himself in a Hollywood ballroom where a conference put on by a watchdog of anti-Israel media bias was in full swing. The daylong conference in Los Angeles, hosted Jan. 18 by the Committee for Accuracy in Middle East Reporting in America (CAMERA), aimed to unmask efforts to turn evangelical Christians away from supporting Israel.

CAMERA is a non-profit organization based in Boston that monitors coverage of the Middle East to expose anti-Israel bias and correct falsehoods. Paul, a Hindu-born Apostolic Christian priest who was born and lives in India, is a flesh-and-blood example of the conference’s topic: a Christian with a deep, religious connection to the existence of the state of Israel.

“As King David says, pray for the peace of Jerusalem,” he said. “We always keep that in mind.”

Yet the pro-Israel contingency in the United States depends on the political support of evangelical Christians as much as their prayers. The CAMERA conference, titled “The Assault on Evangelical Christian Support for Israel,” addressed attempts to disavow people like Paul from their Zionist leanings.

Speakers pinpointed what they described as a revisionist theology invented to serve pro-Palestinian politics. Palestinian activists and some evangelicals have tried to “separate Jesus from his Jewishness” as part of an attempt to erase Jewish history in the Middle East, said Tricia Miller, a senior research analyst for CAMERA. A biblical revision involving “the invention of a Palestinian Jesus” is a dangerous trend for Jews because it potentially weakens Christian support for Israel, she said.

“It is really frightening to see that more and more evangelical Christians and other denominations are falling headlong into this treachery,” said Laurie Cardoza-Moore, who founded Proclaiming Justice to the Nations (PJTN), a groups that educates Christian audiences about anti-Semitism.

PJTN distributes pro-Israel documentaries such as “Israel Indivisible,” which discusses Israel’s historical and archaeological roots. It co-sponsored the CAMERA conference.

Cardoza-Moore, who called herself “Israel’s biggest cheerleader,” told the audience about her organization’s efforts to spread the “biblical truth” of Israel’s claim to the land. Her address sounded at times like a preacher’s sermon, with the audience cutting in to applaud and murmur “that’s right” and following up with a standing ovation. She underscored the importance of educating Christians who might otherwise be won over by anti-Israel activism, saying, “If this audience is not reached, we are in trouble.”

Both Cardoza-Moore and Miller referred to “replacement theology,” which asserts that the Christian faith has replaced Judaism in its biblical role as God’s chosen people. The conference also addressed an anti-Israel trend of a more typical sort: videos and other media meant to play up the Palestinian struggle while leaving out the Israeli narrative.

CAMERA’s Christian media analyst, Dexter Van Zile, played the audience a clip from the 2010 film “Little Town of Bethlehem,” which was produced by Mart Green, an heir to the Hobby Lobby arts and crafts retail chain and the owner of a chain of Christian supply stores.

The movie, Van Zile said, is “billed as a documentary about nonviolence, but is in fact a salvo in the propaganda war against the Jewish state and ultimately the Jewish people.” The film clip showed video of riots in the Palestinian territories spliced with footage of Martin Luther King, Jr.’s “I Have a Dream” speech. The comparison held a particular irony at a pro-Israel conference held on Martin Luther King, Jr. Day.

“It’s kind of odd for me, because basically CAMERA’s bread and butter are factual misstatements [to rebut], but at a certain time we just have to say there’s too many to get into,” Van Zile said. Speakers expressed concern that anti-Israel messages are gaining increasing sway, especially among young people.

David Suissa, the president of the TRIBE Media Corporation, which owns the Jewish Journal of Greater Los Angeles, gave the keynote address. He worried aloud that Millennials are the “soft underbelly” of Christian support for Israel, particularly prone to propaganda targeting the Jewish state.

“Arguments are not enough; even the truth is not enough,” Suissa said. “People work with narratives, and right now the narrative is that we are oppressing other people.”

The speakers, however, made sure to remind conference-goers that many Christians still do support Israel. “You have millions of agents from the goyim (gentiles in Yiddish) underground doing everything we can to turn the tide on this,” said Randal Neal, the western regional coordinator for Christians United for Israel, the largest pro-Israel organization in the U.S. by membership, using the Yiddish word for a gentile.

The conference took place at Neman Hall, a kosher banquet hall that regularly plays home to Jewish weddings as well as bar and bat mitzvahs. For a Jewish venue, an unusual amount of talk about Christian prophecy bounced from the room’s decorated earth-tone walls. Paul, 75, said he has helped found 85 churches since the Lord appeared to him in 1982 and commanded him to preach. For him, the prophecy that the Earth’s nations will rise against Israel in the end of days creates a painful contradiction.

“As a whole, Indian Christians love Israel,” he said. “But at the same time, we cannot change the inevitable.” The inevitable—that the apocalypse must converge on a Jewish Jerusalem—motivates Paul’s strident support of Israel and his interest in the conference’s topic.

For others, the connection is more personal.

Lynda Lee Adams-Chan met her husband 30 years ago at a Christmas party held by the father of one of the speakers, Brad Young, a professor of biblical literature at Oral Roberts University, a Christian university in Tulsa, Okla. When she heard Young would be speaking in Los Angeles, she decided to travel from Vancouver, Wash., driving and camping with her son down the coast to Redding, Calif., before completing the journey by plane.

“I said, ‘Somebody from the family needs to go say hi to Brad Young,’” she said. “If it hadn’t been for that Christmas party, we wouldn’t have met.”