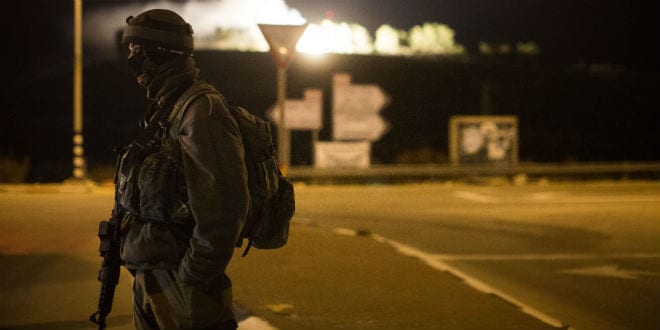 A senior military source told Israel Radio that following the Otniel Terrorist attack Sunday, where 38-year-old Jewish mother Dafna Meir was stabbed to death in her home in front of her children, the security apparatus may have to reexamine the entry of Arab workers into Jewish communities in Judea and Samaria. The source said that even if the murder Sunday night was carried out by a single attacker, there would be copycat attempts elsewhere, and security forces must offer an effective response to that possibility.

Meanwhile, the manhunt for the Otniel killer continued through the night in the south Mt. Hebron area. Overnight IDF and Border Guard soldiers arrested 27 wanted terrorists, 24 of whom are suspected of carrying out terror acts.

Ran Dahan, chairman of the Otniel local committee, told Hakol Hayehudi Monday morning, “We call on Prime Minister Netanyahu to stop hiding behind the olive tree of a ‘Palestinian State’ and begin imposing Israeli sovereignty on the areas of Judea and Samaria. We’ve had enough talking, it’s time for doing. It is inconceivable to perpetuate a situation whereby 400 thousand Israelis live under martial law for 48 years.”

Dahan added that local residents are asking the government to carry out preventive action in the area: “We demand that they quash the wild incitement on [Palestinian] TV channels, radio and the mosques; to limit [Arab] movement on the main roads; to stop the revolving door approach [to Arab security prisoners]; and order infrastructure planning for all of Judea and Samaria, especially in [Jewish] residential areas.”

Chairman of the Hebron Mountain Regional Council Yochai Damari said, “Otniel has known this kind of incidents in the past. Otniel is huddled in deep mourning and preparing for the future, but, nevertheless, I say clearly, we will only grow from this murder, Otniel will double its strength.”

Damari called on Netanyahu to empower the Jewish residents of Otniel and Mount Hebron in light of Sunday’s event.

Dafna Meir HY”D left a husband and six children, ages 4 to 17. She worked as a nurse at the Soroka Medical Center in Be’er Sheva, where she was pronounced dead Sunday night.