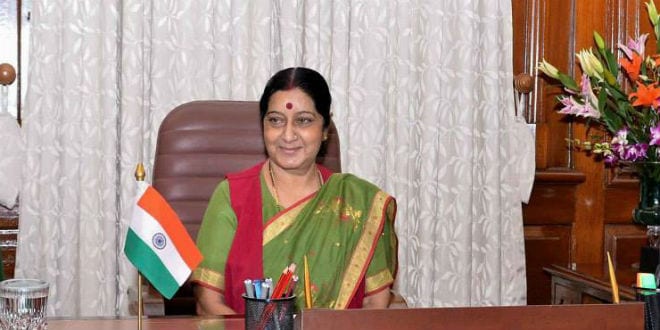 Indian Minister for External Affairs Sushma Swaraj arrived yesterday for a two-day visit to Israel and the Palestinian territories, a sign of strengthening ties between India and the Jewish state. Swaraj, the first woman to hold the position, has long been a personal supporter of Israel and publicly acknowledged her admiration for Israel’s first female prime minister, Golda Meir.

Swaraj is the third high-profile Indian official to visit Israel in the two years since Narendra Modi and his BJP party came to power, following appearances by President Pranab Mukherjee last year and Home Minister Rajnath Singh in 2014.

During that same period, Israel’s Minister of Agriculture Yair Shamir and Minister of Defense Moshe Ya’alon have both visited India. Israeli Prime Minister Benjamin Netanyahu is scheduled to travel to India later this year, as well, followed by a trip to the Holy Land by Modi.

According to an analysis carried by i24 News, India’s growing relationship with Israel is part of its broader strategy of engagement with the Middle East, a region it considers “West Asia”, and its efforts towards “multi-alignment”, or reaching out to all major powers.

Prior to her Israel trip, Swaraj and other ministers have also visited several Arab and Muslim countries.

According to the spokesperson of India’s ministry of external affairs, “India’s relations with Israel are part of its engagement with the broader West Asia region and are independent to its relations with any country in the region.”

Senior analyst and founding director of Carnegie India, Dr. C. Raja Mohan, agrees. “It is high time that India stopped looking over its shoulders each time it engages with Israel. That is what the Modi government is doing – putting an end to the furtiveness of the relationship that had prevailed in the past.”

Full diplomatic relations between Israel and India were established in 1992, but much of the countries’ interactions took place under a shroud of secrecy. In fact, India’s associations with the entire region were minimal for a long time. Modi’s predecessor, Manmohan Singh, only visited the Middle East five times in his decade in power.

Recently, however, ties have been strengthening, especially on strategic matters. “Engaging with Israel is critical to India’s counter terrorism strategy,” says Maj. Gen. (retired) Dipankar Banerjee, a senior strategic analyst with the independent think tank, Forum for Strategic Initiatives. “It is even more important today, given the targeting of India by the Islamic State organization. Israel’s intelligence on terror groups in the Middle East is second to none. It is an existential question for Tel Aviv.”

As evidence of growing cooperation, last month India successfully conducted tests on the Barak 8 missile defense system, jointly developed with Israel. Meanwhile, in November it was announced that the city of Tel Aviv would collaborate with Mumbai, India, to create smart cities.