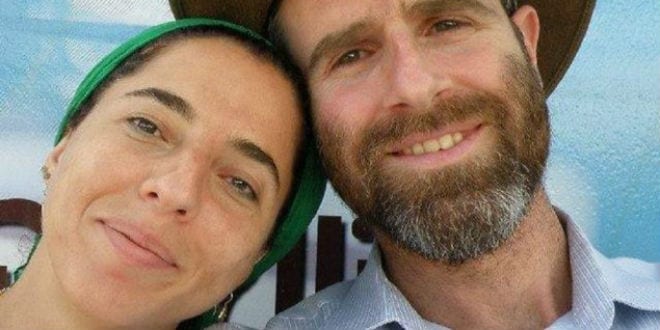 A Jewish woman was brutally murdered while defending her children from a terrorist who broke into their home in Otniel on Sunday afternoon.

Dafna Meir, 39, was at home with three of her six children in the Judean town of Otniel, located in the Hebron hills, when an Arab man entered her house. Meir struggled with the terrorist in the entrance of the house in an attempt to keep him away from her children, receiving multiple fatal stabbing wounds.

The terrorist then fled the scene of the attack, which had been witnessed by Meir’s 15-year-old daughter. She later told police what had happened and described the attacker to security forces, who are currently combing the area to find traces of him.

The assailant is believed to have escaped to a nearby Arab village. Overnight, five Palestinians in the area of the settlement were detained in connection with the attack, and another 22 were detained after sweeps across the West Bank.

While there is security camera footage of the terrorist escaping from the gated community on foot, there is no evidence of him breaking in. Security forces have said it is likely that he was a construction worker employed in Otniel.

The settlement was put on lockdown following the attack, with residents being advised to stay inside. On Monday, all Palestinian workers were banned from entering Jewish communities in the area.

Meir was mother to four children between the ages of 11 and 17, and two foster children, both under five. A nurse in the neurosurgery department of Soroka Medical Center, Meir was known for her joyful demeanor and generosity.

She worked with the Summit Institute, an organization which gives assistance to disadvantaged Israeli children struggling with trauma, mental illness, family crises, and special needs. Meir and her family had taken in two young foster children as part of the Institute’s family-based residential foster care program, one of whom has special needs.

“Dafna and her husband provided a warm and loving home to two children, one of whom is a special-needs child,” Summit Institute Executive Director Yoni Bogot said in a statement. “Dafna dedicated her life to saving lives, both as a nurse and as a foster mother. May her memory be a blessing and an inspiration to us all.”

Meir’s friend Liron Steinberg added, “She always looked for how to help.” She said that Meir had often invited troubled kids from a nearby youth village to her home if they didn’t have a place to go.

The attack was immediately condemned by Israeli officials, who expressed sorrow and grief over the incident and warned that Palestinian terrorism would “require us to act with an iron hand”.

Eli Yishai, former Interior Minister, said in a statement, “I am shocked by the murderous attack in Otniel. The cruelty of the  murderers knows no bounds.”

“Again we come across the face of uninhibited evil. An awful murder of a Jewish woman, may her memory be blessed, in her private home, with her only ‘sin’ being that she was an Israeli Jew,” he added.