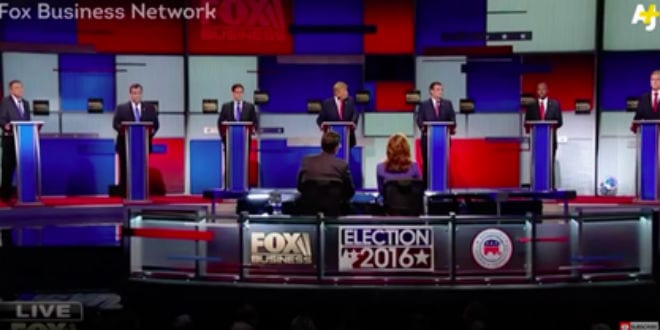 Several of the candidates criticized Obama for not referring to Iran’s detention of 10 U.S. sailors in his Jan. 12 State of the Union address. Cruz called the images of the sailors being forced to kneel with their hands on their heads “heartbreaking.”

The candidates also criticized Democratic presidential candidate Hillary Clinton, with Bush saying that she “wants to continue down the path of Iran, Benghazi, the Russian reset, Dodd-Frank [Wall Street reform]—all the things…that have gone wrong in this country. She would be a national security mess. And that is wrong.”

Regarding Iran, Bush said the U.S. “should reimpose sanctions” because Iran had “already violated sanctions after this agreement was signed by testing medium-range missiles.”

On the issue of his much-publicized remark that the U.S. should ban all Muslims from entering the country due to to the threat of terrorism, Trump doubled down on his position, saying that “we have to stop with political correctness. We have to get down to creating a country that’s not going to have the kind of problems that we’ve had with people flying planes into the World Trade Center…with the shootings in California, with all the problems all over the world. I just left Indonesia—bomb, bomb, bomb, bomb. We have to find out what’s going on. I said temporarily. I didn’t say permanently. I said temporarily.”

Of the debating candidates, only three directly referred to Israel. Bush said the U.S. needs to move its Israeli embassy “from Tel Aviv to Jerusalem to send a serious signal that we’re back in the game with Israel.”

“Barack Obama believes that America is a arrogant global power that needs to be cut down to size. And that’s how you get a foreign policy where we cut deals with our enemies like Iran and we betray our allies like Israel, and we gut our military, and we go around the world like he has done on 10 separate occasions and apologized for America,” Rubio said.

Carson said, “What we need to do is get a group of experts together, including people from other countries, some of our friends from Israel, who have had experience screening these people and come up with new guidelines for immigration, and for visas, for people who are coming into this country.”

Although Trump has been leading most Republican election polls, Cruz has recently taken the lead in some polls of Iowa voters. A Reuters/Ipsos national poll on Jan. 12 showed Trump leading with 39 percent of the GOP vote, followed by Cruz at 14.5 percent, Bush at 10.6 percent, Carson at 9.6 percent, and Rubio at 6.7 percent.