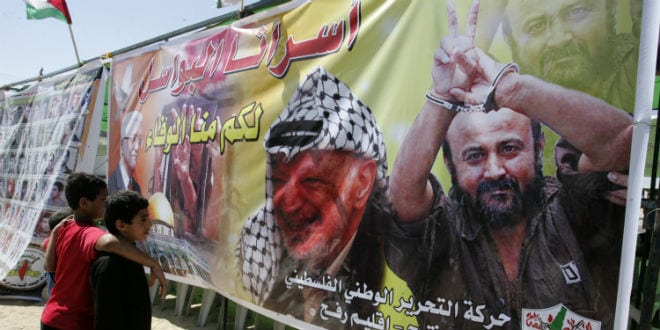 TV host: “What do you know about Yasser Arafat? You were not born yet when he died as a Shahid (martyr). Did your father tell you a lot about him?”
Girl: “Yes.”
TV host: “Very nice. What did he tell you about him?”
Girl: “Yasser Arafat wanted to fight in order to free Palestine, and suddenly the Jews killed him and he died as a Martyr.”
TV host: “My dear, may Allah have mercy on his soul and on the souls of all our Martyrs. It is happening at the moment to all of our Martyrs. But he [Arafat] was the leader and the symbol… Yasser Arafat is a legend, a special man. His wish was to die as a Martyr, and he did indeed die as a Martyr. However, when the occupation understood that he would not give up on his great dream, which was the liberation of Palestine, unfortunately they killed him.”

Despite refusing to release the medical records relating to Arafat’s death and despite the lack of any proof, the PA persists in perpetuating the rumor that Israel was to blame in official and international media. There have been numerous incidents reported of PA officials making this claim explicitly and the PA instigated an investigation, claiming an international plot had poisoned him with polonium. Most recently,on January 1, Amal Hamad, a PA Central Committee member, said on PA TV, that Ariel Sharon had poisoned Arafat, and hinted that the same fate may be planned for Mahmoud Abbas, the present PA President who replaced Arafat.

Yaaser Arafat died in November 2004 in Calmart, France. The cause of his death was not made known to the public and his wife, Suha, refused to permit an autopsy. In 2007, Ahmad Jibril, Head of the Popular Front for the Liberation of Palestine – General Command stated on Al-Manar TV that the PA leadership knew that Arafat died of AIDS.

Nonetheless, the PA continued to spread rumors that Israel had poisoned Arafat. This was intended to reflect the Islamic tradition that Jews poisoned Muhammad.  PA Minister of Religious Affairs, Mahmoud Al-Habbash, said precisely this in a Friday sermon broadcast on PA TV in November 2013, saying that Arafat was murdered in the same way as Muhammad, repeating three times that Muhammad died from poison given to him in the fabled Jewish city of Khaibar.

Just after Al-Habbash’s sermon, Reuters reported that the PA took samples from Arafat’s remains to test if he had been poisoned by polonium, the theory being he had been murdered in a joint Israeli-American-French plot. In November 2013, a Swiss and a Russian team published the results of these tests. The Swiss team concluded that the tests were “coherent with a hypothesis of poisoning.” However, a member of the team also stated that “our study did not permit us to demonstrate categorically the hypothesis of poisoning by polonium.” The Russian report concluded that “there was insufficient evidence to support the theory that Yasser Arafat died in 2004 by polonium poisoning.”

In March 2015, three French judges ruled that “it has not been demonstrated that Mr. Yasser Arafat was murdered by polonium-210 poisoning.” The French prosecutor stated that there was “not sufficient evidence of an intervention by a third party who could have attempted to take his life.” The French prosecutor also explained that the polonium and lead found in Arafat’s grave were “of an environmental nature.”