Son of Baba Sali Proclaims: “The Days of Ishmael Ruling in the Land of Israel Are Over!”

Home » Son of Baba Sali Proclaims: “The Days of Ishmael Ruling in the Land of Israel Are Over!” 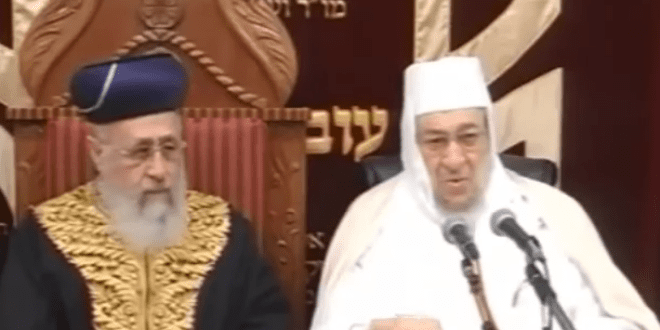 The end of days are quickly approaching, announced a prominent Israeli rabbi, as the “difficult security situation in Israel” heats up.

In a video making the rounds online, Rabbi Yitzchak Yosef Amar, the former Sephardi Chief Rabbi of Israel, is seen hosting Rabbi Baruch Abuhatzeira, known as the Baba Baruch and son of the late Baba Sali, who was one of the greatest Kabbalists of our generation. In a markedly uncharacteristic manner, the Baba Baruch related to present events in Israel and their connection to the imminent arrival of the Messiah.

In the video, which was broadcast to hundreds of thousands of viewers, Rabbi Baruch spoke about “the difficult security situation in Israel” but reassured his audience by saying the hard times were almost over.

“It is finished and from today on, the years in which Ishmael (the Arabs) rule over the Jews are finished,” he stated. “There are signs the Messiah is imminent.”

Beseeching God, Rabbi Baruch called out, “Enough already! The nation of Israel can no longer bear it. Everything that is happening today, in Israel and all over the world, may the evil ones be cursed, it is spoken about in Kabala.”

Rabbi Baruch then related what is written in the Zohar, Judaism’s central mystical Jewish text, regarding the divine reward for the nation of Ishmael and its ultimate downfall.

“Rabbi Shimon Bar Yochai (a sage from the Second Temple period) said that the ministering angel of Ishmael stood in front of God and petitioned him, saying, ‘Anyone who does a mitzvah (good deed) should receive a reward. Ishmael circumcised himself. And not just at eight days, but when he was 13 years old! Does he not earn merit for this?’”

Rabbi Baruch taught, “The Zohar says that God answered, saying that the land of Israel will be given to them during the time that it will be empty of Jews, after the destruction of the Temple.”

“That is exactly what happened,” he continued. “God gave Ishmael 100 years for every year until he was circumcised; 1,300 years to rule in the land of Israel. Now we see that the end of this time has come. They were here, they ruled over the land, they received their reward, now it is time for the Nation of Israel to rule in their land. It is time for the messiah and the redemption, when Israel will rule over all of the land. Not this part belonging to them and this part belonging to us.”

Rabbi Baruch concluded his message with a special blessing: “With God’s blessing, we will merit seeing this with our own eyes, the arrival of the Messiah, who will subdue them and send them out from our land.”