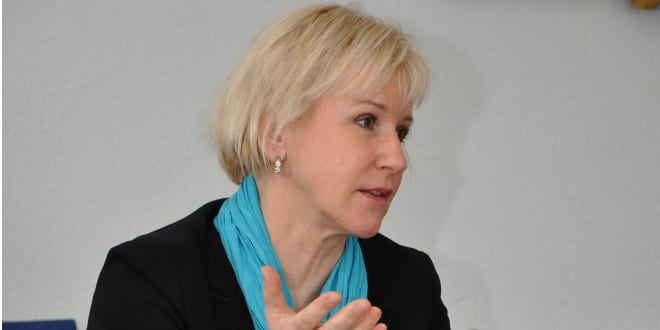 Following an accusation by Swedish Foreign Minister Margot Wallström alleging that Israel carries out “extrajudicial executions” of Palestinian terrorists, her Israeli counterpart Tzipi Hotovely said that Israel is “closing its doors to official visits from Sweden.”

In remarks made to a cadets’ course for future Israeli diplomats, Deputy Foreign Minister Hotovely said that Wallström is “de facto supporting” terrorism with her recent incendiary remarks.

On Tuesday, Wallström called for an investigation into alleged extrajudicial killings of Palestinian attackers, referring to those Palestinians who are killed while attempting to carry out terror attacks against Israelis and Jews.

Wallström told lawmakers, “It is vital that there are thorough, credible investigations into these deaths in order to clarify and bring about possible accountability.”

Hotovely called the remark “a terrible combination of foolishness and diplomatic stupidity.”

“In her irresponsible and delusional statements, the Swedish foreign minister provides tailwind to terror, and thus encourages violence,” the Foreign Ministry said.

Israeli politicians across the spectrum also spoke out against Wallström. Zionist Union Chairman Isaac Herzog wrote on his Facebook page that the comment “backs terrorism” and “helps the murderous terrorists who do everything possible to stop us from [reaching a two-state solution].”

Herzog went on to question why Wallström did not make similar accusations against other countries that have killed terrorists in self-defense. “It’s interesting that Sweden did not have a similar response when police in Paris killed the terrorists, as they had to do, and it will be interesting to see how Sweden will react when terrorists carry out attacks within its territory. Will it also want to pat them on the head because they had difficult childhoods?” he asked sarcastically.

Energy Minister Yuval Steinitz (Likud) said that Wallström’s selective remarks targeting Israel revealed a double standard based in discrimination against Jews. “A person who looks at the war on terror worldwide and comes to the conclusion that Israel is the only country whose tactics must be investigated is anti-Semitic,” he stated.

The Swedish foreign minister has a history of making accusations against Israel. She first called Israeli shootings of terrorists “extrajudicial executions” in early December. Wallström added that Israel’s reaction to Palestinian terror was “disproportionate”, citing the disparity in casualties on each side.

Following the coordinated Paris terror attack in November which killed 130 people, Wallström blamed the radical extremism which led to the attack on Muslim frustration in the Middle East, specifically mentioning Palestinians.