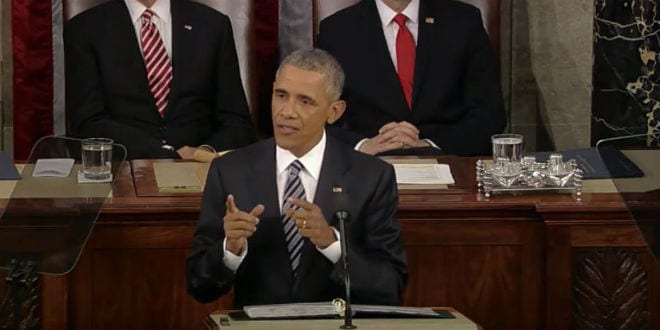 On Tuesday night, US President Barack Obama gave his final State of the Union address, pushing an optimistic vision of the current state of America, calling the threat of ISIS dangerous but not existential, and, even as Iran holds 10 US sailors with no guarantee of return, praising the nuclear deal which he and Secretary of State John Kerry labored to pass in Congress.

Obama lambasted critics who accuse him of being weak on terror by saying that the true dangers of terror are simply exaggerated, and called claims that the ongoing international conflict with the radical Islamic State represents World War III “over the top”.

He downplayed the threat of individual terrorists and terror cells, saying that “masses of fighters on the back of pickup trucks and twisted souls plotting in apartments or garages . . . do not threaten our national existence.”

The president also attempted to create distance from the idea that America should be responsible for maintaining stability in problematic regions, including the Middle East. He said that while “America will always act, alone if necessary, to protect our people and our allies”, on issues of global concern, it must “mobilize the world to work with us, and make sure other countries pull their own weight.”

This goal, he said, was why the US had worked so hard to craft the Iran nuclear deal, which has been a sore point of contention between the Obama administration and political opponents – on both sides of the aisle – who believe the deal is little better than appeasement.

Obama praised the deal in his speech, boasting, “We built a global coalition, with sanctions and principled diplomacy, to prevent a nuclear-armed Iran.”

“As we speak, Iran has rolled back its nuclear program, shipped out its uranium stockpile, and the world has avoided another war,” he continued.

He did not mention the ongoing dramatic incident with Iran which unfolded just hours before the State of the Union was given. On Tuesday afternoon, Iran seized two US Navy ships, crewed by 10 American sailors, which it said had trespassed into its waters. Obama officials said they had received assurances that Iran would release the sailors soon, but reports were neither confirmed nor denied by Iran.

The incident is just the latest in a series of Iranian actions which seem to be aimed at testing the limits of what the US will allow rather than risk endangering the nuclear deal.

He added, “Democracy breaks down when the average person feels their voice doesn’t matter; that the system is rigged in favor of the rich or the powerful or some narrow interest.”

Obama admitted that one of the failings of his administration has been the rise in rancor between the political parties, which have become increasingly polarized under his presidency.

He warned the American people against listening to “the voices urging us to fall back into tribes, to scapegoat fellow citizens who don’t look like us, or pray like us, or vote like we do, or share the same background.”

That discriminatory path, he said, “won’t deliver the economy we want, or the security we want, but most of all, it contradicts everything that makes us the envy of the world.”

Obama concluded on a hopeful note, calling America “clear-eyed, big-hearted”, and “optimistic that unarmed truth and unconditional love will have the final word” – characteristics which he said made him “confident that the State of our Union is strong.”