Aliyah and the “Three Biblical Oaths”: Is Now the Time for Jews to Return to Israel?

Home » Aliyah and the “Three Biblical Oaths”: Is Now the Time for Jews to Return to Israel? 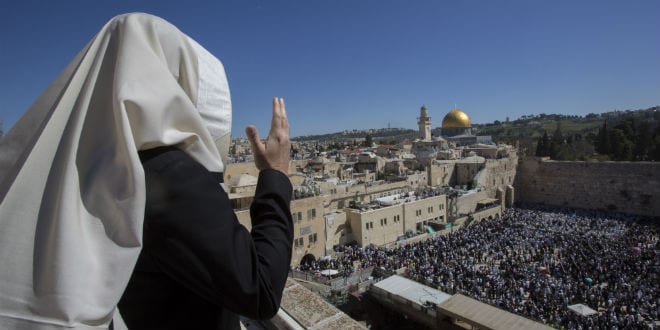 Though living in Israel is a mitzvah, a commandment from the Bible, many religious Jews refrain from moving to Israel  citing “the three oaths” as their source, which has led to bitter conflict between Jews.

The three oaths are derived from a section in the Talmud (Ketubot 111a), the book of oral Jewish law, that comes to explain why the verse “I have bound you in oath, O daughters of Jerusalem” is repeated three times in Song of Songs (2:7, 3:5, 8:4). The Talmud quotes Jewish sage Rabbi Yossi, the son of Rabbi Chanina, who interprets the repetition to mean that God bound Israel with three oaths:

That the Jews would not forcibly re-enter the land of Israel.

The Jews should not rebel against the nations.

The nations of the world should not oppress the nation of Israel too much over the course of the exile.

The major proponent within the Jewish world of the three oaths is the former Satmar Rebbe, Rabbi Yoel Teitelbaum. In 1961, Rabbi Teitelbaum wrote in his book “Vayoel Moshe” that God brought about the Holocaust because the secular Zionist movement violated the oath by forcefully resettling the Land of Israel en masse.

Despite the shocking import of his statement, the rabbi dedicated 153 pages of scholarly discourse to arrive at this conclusion. His conclusion was that the exile of the nation of Israel from the land of Israel was God’s decision and any attempt to unilaterally obviate the Diaspora goes against the will of God. While Rabbi Teitelbaum rules that it is permissible for individual Jews to live in Israel, adherence to the oaths precludes a mass aliya and a Jewish government or army until the Messiah comes.

Rabbi Teitelbaum was a respected scholar and Satmar is the largest Hassidic sect with over 100,000 followers worldwide. They strictly adhere to his teachings and, to this day, vehemently oppose the State of Israel.

Venerated scholar of Jewish history, Professor Chaim Waxman, explained to Breaking Israel News the more in-depth and nuanced implications of what has become known as the three oaths divide.

Waxman noted that the three oaths did not play a significant role in Jewish history and was rarely invoked due to the practical reality of aliyah not being feasible. The three oaths were also limited to a prohibition against mass aliyah, probably invoked to prevent proto-Zionist groups from antagonizing the non-Jews.

“It was usually invoked against making aliyah for non-religious reasons, what was viewed as profane and impure reasons. Regardless of the three oaths, we know of many cases of rabbinically acceptable aliyah, as in the Rambam and the students of the Gaon of Vilna. The general consensus was that aliyah for purely religious reasons was acceptable,” he told Breaking Israel News.

Waxman explained that aliyah became more of an issue with the rise of modern secular Zionism in the late 19th century. This religious injunction became politicized, setting secular against religious. “But even then, once there was the Balfour Declaration and the League of Nations, most religious Jews accepted that the three oaths, insofar as rebelling against the non-Jews, was no longer relevant,” he told Breaking Israel News.

The professor noted that in the modern pluralistic reality of the Western world, the halachic (Jewish legal) issue of the three oaths remained political much the way it was in the Middle Ages, though not necessarily out of fear of the non-Jews.

“It was surely motivated in part, especially in the Middle Ages, out of fear of non-Jewish reprisal against the Jews who remained behind,” he explained. “Traditionally the sects, Neturei Karta and Satmar, who still invoke the three oaths do so because they see Zionism as a Satanic movement.”

Professor Hillel Weiss, spokesman and secretary of the nascent Sanhedrin, reflected on how a Jewish court of rabbis would view the invocation of the three oaths in modern times.

“The three oaths as seen in the Gemara in Ketubot applies while the Jews are in exile,” he told Breaking Israel News. “When Israel is dwelling in Jerusalem and throughout the country, and almost seven million Jews have been gathered from the Diaspora, it is unusual not to recognize the good that God has done for us and to respond in kind.”

“From the section of Song of Songs referring to the three oaths, it is written, ‘I have sworn you, O daughters of Jerusalem, by the gazelles, and by the hinds of the field, that ye awaken not, nor stir up love, until it pleases.’Because it is now clearly God’s will and a desirable thing, it is time to awaken and come to Israel.”