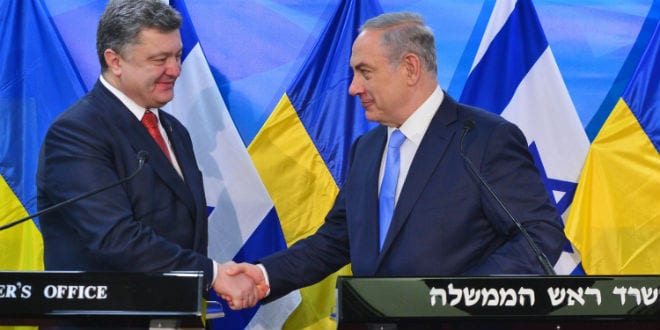 In the oligarchy that has taken over Ukrainian politics, President Petro Poroshenko is a bit of an enigma. He recently made history when, in late December, he became the first Ukrainian President to address the Israeli Knesset.

That momentous occasion, significant for both countries, was lost in the internet buzz when he posted a photoshopped meme on Twitter, depicting a recent cover of the Economist Magazine featuring an array of world leaders. Poroshenko in a dangerous act of hubris, replaced the photo of Russian President Vladimir Putin with a photo of himself. It was a dangerous spoof, since relations between Putin and Poroshenko, cordial at the moment, have been rocky at times.

Ukraine’s president photoshops himself onto the The Economist in place of Putin, then deletes it (h/t @27khv) pic.twitter.com/aZT9pl8PXO

Poroshenko’s act left many scratching their heads, wondering exactly who this president of a beleaguered and war-torn country was, who would tweak the tail of the large Russian bear dominating their eastern front. The answer may very well be connected to his recent trip to the Holy Land.

Poroshenko is a billionaire, known as the “Chocolate King” for his holdings in Roshen, an enormous confectionary company. He is considered one of the more influential of the billionaire politicians that run the country.

That much is known, but one of the questions that has been asked and never clearly answered about this very public figure is whether or not Poroshenko has Jewish roots in his family tree. The most common theory is that his Jewish father, Alexander Valtsman from Odessa, took on the last name of his wife, Yevgenya Poroshenko, in 1956.

Despite the rumors, or perhaps due to them, Poroshenko denies any family ties to the Jewish people. In an article in Forward in October 2014, Rabbi Moshe Azman, a chief rabbi of Ukraine, was asked about the issue. He recounted how he had personally asked Poroshenko in a direct manner if the rumors of his ancestry were true. Azman reported to the Forward, “He told me he wasn’t Jewish.”

The previous year, Forbes, referring to Poroshenko as the “Willie Wonka of the Ukraine”, listed him as one of the world’s richest Jews. Irina Fireez, a spokeswoman from Poroshenko’s office, contacted the magazine, requesting that he be removed from the list.

In the face of his denials, the far-right in Ukraine has no doubts. During his presidency campaign last year, they shouted anti-Semitic epithets at Poroshenko whenever he went out in public. To this day, they refer to him as a Jew, usually accompanied by a derogatory or anti-Semitic insult.

In addition to seizing his assets in Russia, Putin’s government tried to fan these flames of Jew-hatred in their campaign against the new president.

The most compelling aspect of his rumored Jewish identity is that it did not prevent him from being elected, nor does it seem to have lessened his present popularity.