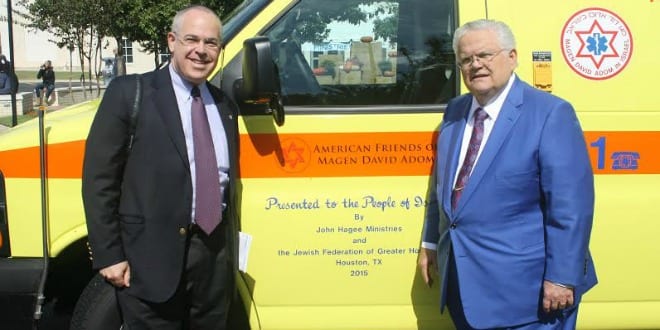 When one thinks of Orthodox Jewry, the first thing that comes to mind is probably not building relations with Christians. However, for Jonathan Feldstein, Director and founder of Heart to Heart Israel, that is exactly what he set out to do.

“Jews, in particular, wonder why we should care about Christians who love Israel,” shared Feldstein to Breaking Israel News. “I can bear witness to the close fellowship of many Christians towards Jews and Israel who love us unconditionally and embrace us wholeheartedly.”

Feldstein is passionate about building bridges between Jews and Christians. This calling began in the 1980s during a trip to Tennessee as a representative of the Israel Foreign Ministry. Devout Christians, dressed in blue and white, were singing Hebrew songs and performing Israeli dances. “The love that they expressed towards Israel was palpable,” reflected Feldstein to Breaking Israel News. “But, I didn’t understand where it was coming from.”

Raised in New Jersey by an Israeli born father whose parents fled Europe before the Holocaust, and a mother whose family fled the raging anti-Semitism of Russia and Hungary, Feldstein noted that it was very common for American Jews to think that they can only trust and rely on themselves to survive. “Thousands of years of Diaspora, statelessness, persecution, discrimination, murder, and genocide tends to do that to a people,” he said with a dose of irony.

His long list of endorsements and achievements read like a Who’s Who of Christian circles. As Ken Barun, Chief of Staff for the Billy Graham Evangelistic Association stated during the ambulance dedication, “Jonathan Feldstein is (an) absolute gem. [He] probably knows as many pastors in this country as I do.”

Feldstein’s accomplishment for creating ties between Jews and Christians is awe inspiring. He is a regular participant in the annual Israel Embassy Christian Solidarity event, has spoken at the National Religious Broadcasters convention with introductions from Dr. Jerry Johnson, and renowned performers Michael W. Smith and Ricky Skaggs. Additionally, he was featured on several TV programs and radio stations including: SON Broadcasting, CrossTalk, Watchmen Broadcasting, WATC TV Atlanta, WTGL TV 45 Orlando, The Dennis Prager Show, The Mike Gallagher Show, CBN’s The Watchman with Erick Stakelback, and The Harvest Show.

Not only is Feldstein a popular guest speaker in churches and Christian conferences throughout the US, he is a regularly featured columnist for Charisma’s “Standing With Israel” site.

“One of my most exciting and successful projects was creating the ‘Israel Ambulance Road Trip’ which provided Christians from eight states the opportunity to pray over a new ambulance donated by Bridges for Peace,” beamed Feldstein to Breaking Israel News. “We covered more than 2,000 miles and had thousands of participants. This experience helped to secure the donation of several new ambulances for Israel by a variety of leading ministries.”

The uniqueness of Feldstein’s mission is not lost on the many Christian leaders he has befriended. As Pastor Gerald Paradise of Calvary Chapel in Philadelphia shared, “I have known of the reluctance of the Jewish community to avoid all contact with the Christian community and I understand their rationale. But, Jonathan is a warm hearted ambassador for both the Nation of Israel and God’s chosen people.”

Feldstein’s hard work has formed a love between the Christian Evangelical community, Israel and the Jewish people. As co-creator of the Facebook group, “Jews Who Love Christians Who Love Jews (And The Christians Who Love Them)” with Gidon Ariel, co-founder of Root Source, Ariel shared with Breaking Israel News, “We created this group as a safe space for Jews working with Christians to share concerns and successes. With Jonathan Feldstein on-board, we attracted more Christians than Jews by a ratio of about 500 to one!”

Another leader in forging ties between Jews and Christians, David Nekrutman, the Executive Director of Center for Jewish Christian Understanding and Cooperation, praised Feldstein’s trailblazing activities, “(Jonathan’s work) is a true Kiddush Hashem, a sanctification of God’s name, and shows how far we have come in bettering the relationship between both faith communities.”

Charged with advancing relationships between US Christians and the State of Israel, Jack Sztrigler, the Director of Strategic Outreach at the Israeli Embassy in Washington, DC shared, “Jonathan Feldstein has become a leader in building bridges among Israel and Christians. It’s not only through his work which is invaluable, but also through his presence and sincerity. As a result he is an excellent ambassador and partner for these efforts.”

Sharing that view, Ron Steslow from an Independent Church Multiplication Facilitator in Nevada wrote, “Jonathan is a relational broker and bridge-builder that knows the times and seasons of not only Israel but the global scenario she effects. He understands that partnerships with Christians, Jews and others that focus on humanity and goodness can and will yield the best fruits of mankind’s compassionate expression.”

Among the many people who run to share their enthusiastic support of Feldstein’s work, Pastor Greg Stone of Gateway Church best summarized the relationship, “Jonathan has consistently demonstrated an ability to effectively reach across the boundary to the Christian Evangelical community. It is no secret that many in the Christian Evangelical community have a deep love for Israel and the Jewish people. Jonathan is a wonderful bridge between the two communities.”

Feldstein noted to Breaking Israel News that his work uniting the Christian and Jewish communities is a deeply rewarding gift. “It is emblazoned in my heart that being Jewish carries with it a responsibility not to be taken for granted for bringing good to the world.”