With Winter’s Arrival to Israel, IDF Soldiers in Urgent Need of Warm Clothing 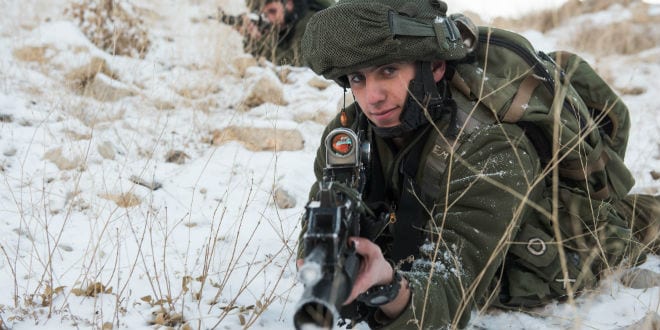 Last week, Israel was hit by its first major winter storm. Up to 60 centimeters of snow (about 24 inches) fell on parts of Mount Hermon and the Golan Heights looked like a winter wonderland. However, as temperatures fell to -4°C (25°F), residents scrambled to keep warm and dry. The Gush Etzion region, located south of Jerusalem, also reported frigid weather and snow.

“For most of Israel, snow is an unusual occurrence which brings excitement to its citizens,” noted Dr. John A.I. Grossman, LIBI USA Chairman, to Breaking Israel News. “But, for our IDF soldiers, maintaining security when winter weather arrives brings its own challenges.”

Part of those challenges is assuring that soldiers are kept warm, dry and protected from the elements. LIBI USA is currently raising funds in order to assure that IDF soldiers have the right winter wear.

Soldiers must man their positions and fulfill their missions no matter what Mother Nature delivers. Though IDF soldiers are provided with basic gear, the need for high-quality coats, long johns, warm socks, gloves and hats are in great demand.

Speaking upon anonymity for security reasons, Breaking Israel News interviewed an IDF soldier who is currently serving in the North. He shared that the soldiers guarding the northern borders were so cold last week that the army forbade them to sleep for fear of hypothermia.

“One soldier lost his toe to frostbite,” the soldier noted to Breaking Israel News. “We cannot abort our missions even when we are freezing.”

Following three rockets fired into Israel from Lebanon two weeks ago and nearly 1,000 terrorist attacks in the past three months during Israel’s latest wave of terror, the IDF is on constant high alert. “Our missions involve hiding out it places you can’t image and that I can’t share for security reasons,” explained the soldier. “The need for warm winter clothing, like long johns, is huge! Having the right clothing makes an enormous difference to our fighting capabilities.”

The army provides some soldiers serving in cold areas with a snowsuit called a “Hermoneet”, named after Mt. Hermon. However, many serving in the special forces cannot wear this cumbersome snowsuit as it limits their mobility and capability to shoot their weapons.

The soldier told Breaking Israel News this story. “Last year, during a cold spell, there were soldiers who lacked appropriate clothing. An army doctor was with us and insisted that we all huddle together to keep each other warm until relief arrived.”

Efficient and lightweight winter wear which protects from the cold, snow and rain is crucial. Soldiers carry a lot of equipment. Bulky clothing take up room and limits maneuverability.

“Neither snow nor rain nor heat nor gloom of night stays these warriors from the swift completion of their appointed rounds,” explained Grossman to Breaking Israel News. “We must do our part to help them stay warm and healthy during the winter.”