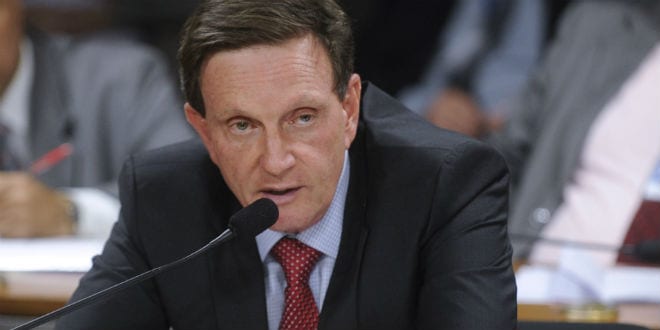 Rejecting the appointed Israeli ambassador to Brazil is akin to supporting the Boycott, Divestments and Sanctions movement (BDS), wrote Brazilian Senator and Evangelical leader Marcelo Crivella in an article published earlier this week.

Crivella, who is known for his pro-Israel stances, is a nephew of Edir Macedo, founder of the evangelical Universal Church of the Kingdom of God. Crivella himself has gathered about 5.2 million followers in Brazil and worldwide.

Diplomatic relations between Brazil and Israel have been tense since Israel appointed Dani Dayan as its ambassador to the South American country four months ago. Brazil has chosen not to recognize the appointment, tacitly rejecting it in an icy move which has angered several Israeli officials.

Brazil objects to Dayan because of his former role as a senior leader in the Yesha Council, a committee which represents settlements in Judea and Samaria. Left-leaning groups, both in Brazil and Israel, have pressured Brasilia not to accept the proposed diplomat, who is Argentinian-born, by arguing that appointing Dayan would essentially express approval of Israel’s settlement communities.

In an article published in the major Brazilian newspaper Folha de S. Paulo, Brazilian lawmaker Crivella came out strongly in support of the appointment.

“Rejecting the ambassador can convey a message that Brazil supports BDS. Leaving Israel without an ambassador won’t help anyone,” he wrote.

“Dani Dayan is a prepared diplomat selected legitimately by a friendly country. The fact that he defends settlements in the West Bank is a weak motive for such discourtesy and so much political inability,” he continued angrily.

Crivella mentioned the historically deep ties between Brazil and Israel, and drew attention to Israel’s position as a key technological partner to the Brazilian defense industry.

He wrote that criticism of Israel is misdirected. “Many of the accusations against Israel stem from a lack of understanding of the country’s geo-political situation,” he said. “Israel’s structural difficulties regarding territory and natural resources must be compensated by an extraordinary capacity of defense and a national security doctrine.”

Regardless of Crivella’s support, it seems likely that Jerusalem will withdraw Dayan’s name and offer an alternative candidate to serve in Brazil, as the conflict seems to have reached an impasse.