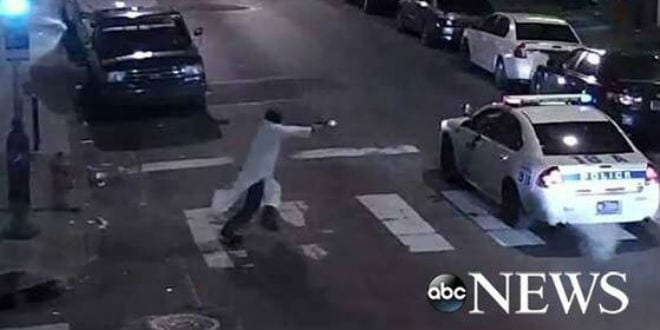 On Thursday night, a Philadelphia man claiming allegiance to the Islamic State ambushed a police officer in his car and shot him three times at close range with a stolen gun, injuring him in the arm. After giving chase, the man was arrested and taken to jail, where he confessed to shooting the officer “in the name of Islam.”

The gunman, Edward Archer, had approached a squad car stopped at a crosswalk and began shooting through the window. He fired at least eleven bullets, three of which hit Officer Jesse Hartnett, shattering his elbow, tearing through nerves, and piercing a major artery.

Hartnett called for backup before getting out of the car and pursuing Archer, despite his injury. With his good arm, he fired at Archer, hitting him in the buttocks as he ran away.

When his backup arrived, they caught the shooter, still holding the gun, and Hartnett was taken to the hospital. His condition was classified as critical but stable on Saturday. He will need multiple surgeries.

Once in custody, Archer confessed and said that he had shot the officer for ISIS and Islam. Philadelphia Police Captain James Clark said on Friday at a press conference, “[Archer] said he pledges his allegiance to Islamic State, he follows Allah and that was the reason he was called on to do this.”

“He was savvy enough to stop just short of implicating himself in a conspiracy,” said Philadelphia Police Commissioner Richard Ross Jr. “He doesn’t appear to be a stupid individual, just an extremely violent one.”

Investigators have found no ties between the shooter and ISIS or any other militant group, and a US Muslim advocacy group said it could find no evidence that Archer was a practicing Muslim. An imam at a mosque near Archer’s house said he did not know the gunman. According to Ross, there is also no evidence that Archer had worked with anyone else.

In 2011, Archer had traveled to Saudi Arabia, and in 2012, to Egypt. Family friends said that the trip had changed him, and that he became more “drastic” and “combative” following his travels.

SHOCKING VIDEO: ISIS terrorist ambushes Philadelphia police officer – shoots him 3 times – and HERO officer fires back and takes down the terrorist!Unite to end terror at www.End-Terror.com

Posted by The Israel Project on Friday, January 8, 2016

Philadelphia Mayor Jim Kenney said after the shooting that Archer’s actions did not reflect on his religion. “In no way, shape or form does anyone in this room believe that what was done represents Islam,” Kenney said. “This was done by a criminal with a stolen gun.”

On Saturday, Archer was arraigned on charges of attempted murder, aggravated assault, assault on a police officer, reckless endangerment and firearms offenses.