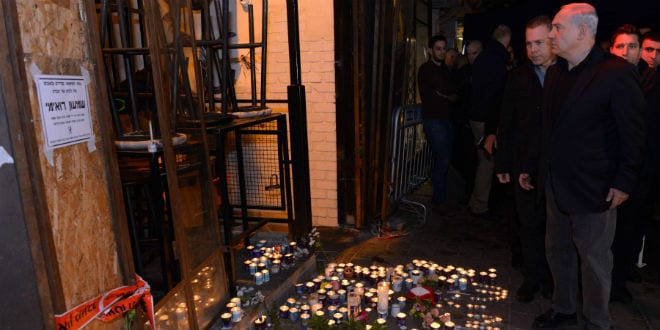 Nashat Milhem, the Arab terrorist who killed three Israelis last week in Tel Aviv, was killed in a shootout with Israeli security forces at around 4:20 pm on Friday near his home in Arara in northern Israel. After a week-long, intensive manhunt, Shin Bet and elite police units tracked him down to a building where his family used to live, 150 yards from where they live now in the town of Arara.

Security forces surrounded the building with the intention of capturing him alive but Milhem tried to flee and opened fire with the same weapon he used in last week’s attack, a Spectre M4 Falcon automatic weapon he stole from his father. Security forces returned fire and Milhem was shot and killed. No Israeli forces were injured in the event. His father works in security and is a volunteer policeman and therefore had several weapons in his possession.

Milhem killed three people last Friday  and wounded seven others in the Tel Aviv attack, spraying bullets into the busy bar on Dizengoff Road, a main thoroughfare in Tel Aviv. Two Israelis, Shimon Ruimi and Alon Bakal, were killed at the bar. He fled the scene and one hour later, killed Amin Shabaan, a cab driver, nearby, as he fled the scene.

Residents of Arara said they knew Milhem was hiding out in their city, aiding him with food, however no one notified police until Thursday night when he broke into a relative’s house. The relative notified the public defender appointed to Mohammed Milhem, the terrorist’s father, who had been arrested earlier in the week. On Friday morning, the father gave his consent to his attorney to notify police.

“He received full help, in particular from his close relatives,” local residents told the YNet news website. “He slept in a different location every day. They brought him food and took care of him.”

Several people, including members of his family, were arrested on suspicion of helping Milhem avoid police.

Times of Israel reported that Hamas’ Al Quds television praised the attack, sending a reporter to Arara to interview residents.

“The shahid (martyr) Nashat Milhem was killed after a gunfight between him and occupation forces in the neighborhood of Zahirat in his village,” reported Al-Quds.

The residents told the anchorman in Arabic that the Israeli security forces had treated them harshly.

“The army attacked us and instructed us with aggression and violence to go inside and shooting began. It included 200-300 bullets,” a town resident said. The shooting “gave each one of us trauma that will be hard to recover from, and at the end of the day, well, may Allah have mercy on his soul, they killed the shahid.”

Times of Israel reported that during the interview, other residents can be seen in the background, speaking Hebrew, condemning Milhem’s actions to Israeli news reporters.

The Palestinian Authority (PA) issued a statement praising Milhem as “one of the most precious martyrs whose name has been inscribed with his pure blood that watered the soil of our free land.”