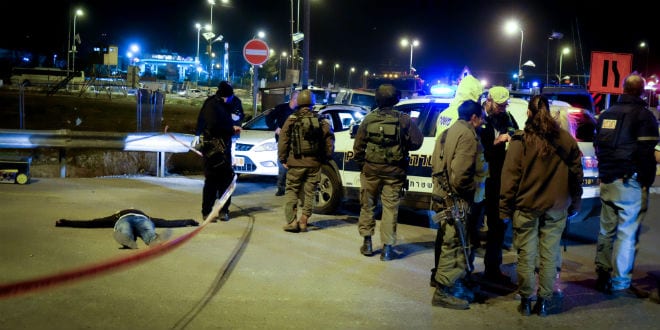 An IDF reservist shot dead three Palestinians on Thursday while they attempted to carry out a stabbing attack near the Gush Etzion junction.

“Three attackers, armed with knives, attempted to stab soldiers guarding the Gush Etzion junction,” the IDF said in a statement, adding that all three of the terrorists were killed.

In a separate incident less than two hours later, a fourth Palestinian terrorist attempted to stab a an IDF soldier stationed at the Beit Anoun Junction outside Hebron, the army said.

While trying to stab the soldier, fellow soldiers on the scene immediately responded. They neutralized and killed the terrorist, the IDF confirmed.

According to a report by Walla! news, the soldiers stationed at the Gush Etzion junction had received a tip to an imminent attack before the three terrorists approached the checkpoint. This particular junction has been a flash-point of ongoing attacks by terrorists against Israeli civilians and security forces.

The three terrorists arrived on foot from the nearby Palestinian village of Beit Fajjar. Wearing black jackets under the cloak of night, the trio was spotted by an officer stationed at an observation post, who relayed the terrorists approach to the soldiers stationed at the junction.

The soldiers halted the terror trio and had them undergo a security check. One drew a knife and was immediately shot, then the two others pulled out knives and were also shot.

Hebrew media reports suggest that the three were relatives of a Palestinian terrorist responsible for an attempted terror attack and we’re seeking to “avenge” their relatives death. He was killed while carrying out the attack and was buried on Wednesday.

Since October 1, through stabbings, gunning’s and car ramming attacks, 22 Israelis, one American and an Eritrean have been killed by Palestinian terrorists. It is estimated that 142 Palestinians have been neutralized by Israeli security forces while carrying out or attempting to carry out terror attacks.