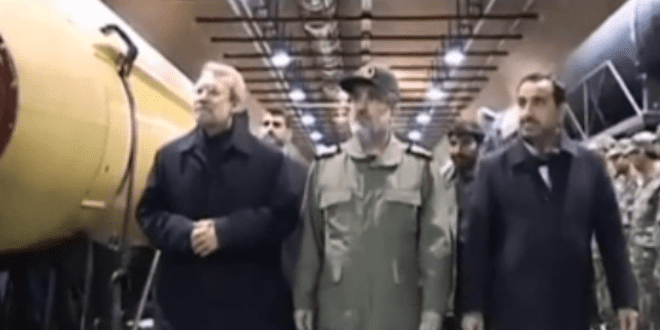 Just weeks before the Obama administration is set to implement the controversial Iran nuclear deal, Iran has proudly announced the construction of a new missile silo designed to hold its surplus of illegal medium-range ballistic missiles.

Iranian state television broadcast footage of the new underground depot on Tuesday, less than a week after its naval missile test in the Gulf led to US threats of new sanctions against the country.

The depot will house Iran’s arsenal of Emad missiles, which are capable of delivering a nuclear payload. According to the US State Department, Iran’s construction of the missiles violates a 2010 UN Security Council resolution.

The US first threatened new sanctions after Iran performed an illegal test of the missile in October, and then another in November, but had yet to implement them when Iran did another test, this time dangerously close to three US warships in the Gulf, in December. The US military called the test “highly provocative” and quickly prepared to impose sanctions.

However, the Obama administration backed off at the last minute, declining to put new sanctions into effect. The administration is likely fearful of stirring up more conflict with Iran as the fateful Implementation Day of its landmark nuclear deal, whose signing was strongly opposed by Israel, draws near.

Once Iran is considered to have upheld its part of the deal in dismantling part of its nuclear program, nearly all sanctions on the country will be lifted.

The revelation of the new missile depot will do little to assuage the concerns of the deal’s critics, who warn that the deal will make the US beholden to Iran and limit the international community’s ability to reign in Iran’s violations of human rights, sponsorship of terrorism, and ultimately its nuclear program, which, under the deal, can be resumed in eight years.

In open defiance of the US’s wishes to resolve Iran’s military ambitions diplomatically, the Iranian government has brazenly ordered the continuation of its ballistic missile program. Last week, in response to the US’s threat of new sanctions, Iranian President Hassan Rouhani instructed his defense minister to expand the program with the goal of improving the precision, range, and payload capabilities of Iran’s missiles.

On Friday, Brigadier General Hossein Salami, second-in-command of the Iranian Revolutionary Guards, said that Iran’s missile depots and underground facilities are so full that Iran doesn’t know how to store its new weapons.