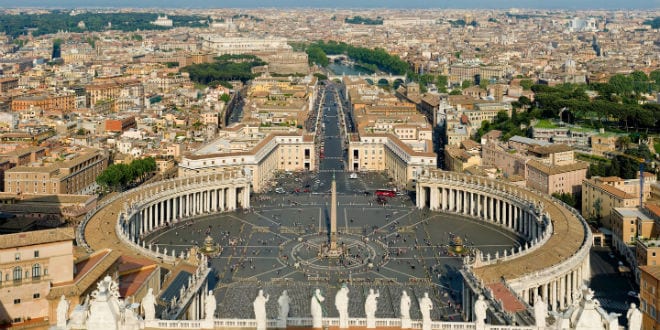 Following the Vatican’s recent release of its latest document on Jewish-Christian relations, the takeaways for most mainstream media were manifested in headlines making such pronouncements as, “Vatican says Catholics should not try to convert Jews,” or “Jews don’t need Christ to be saved.” But advocates and scholars who have worked to foster Jewish-Catholic relations for decades have more nuanced perspectives on the new document and the history that preceded it.

On the 50th anniversary of the groundbreaking Nostra Aetate declaration, the Vatican’s Commission for Religious Relations with the Jews published a text titled, “For the Gifts and the Calling of God Are Irrevocable: A Reflection on Theological Questions Pertaining to Catholic-Jewish Relations on the Occasion of the 50th Anniversary of ‘Nostra Aetate’ (No. 4).” At the core of the new document, experts say, is the Church’s rejection of both replacement theology and the notion that the covenant of the Jews with God has been negated.

In 1965, Nostra Aetate marked the Vatican’s rescinding of an age-old belief that the Jewish people were guilty for the crucifixion of Jesus, in addition to the Church’s rejection of all forms of anti-Semitism.

“As a result of a soul change, epitomized by Nostra Aetate, the Roman Catholic Church shifted from what was, for the most part, a need to condemn Judaism to one of a condemnation of anti-Judaism,” said Dr. Edward Kessler, founder of the Woolf Institute think tank and a fellow at St. Edmunds College in Cambridge, United Kingdom, who participated in a panel discussion with the American Jewish Committee’s (AJC) Rabbi David Rosen to provide a Jewish response to the new Vatican document.

Rosen, AJC’s international director of interreligious affairs, said during the panel that Nostra Aetate “opened up the way for subsequent popes to further affirm the unique bond between the Church and the Jewish people which this [new] text documents, and to see Jewry as a living source of divine inspiration for the Church.”

Now, the Church’s “Reflection” document gives the public new insights into decades of Jewish-Catholic dialogue. It remains unclear, however, whether most observers in the general public are interested in delving into the complexities of that dialogue.

Philip A. Cunningham, president of the International Council of Christians and Jews, said it is understandable that the new document might be either misunderstood or not fully understood.

“In parts, the document is written in specialized Catholic theological terminology, inevitable because of the complexity of the topics it discusses. Therefore, it can easily be misconstrued by readers unfamiliar with relevant past texts or recent topics in the dialogue,” Cunningham told JNS.org.

While “Reflection” was released for public consumption, Cunningham explained, the text is “primarily addressed to a Catholic audience, and to some degree to a specialized Catholic audience: church leaders and theologians who pursue research in and engage in dialogue about the Catholic and Jewish relationship.”

“Jewish interlocutors are a secondary audience, but more noteworthy is that there were Jewish advisers as the document was being drafted and who offered comments at the press conference as the document was issued. That may have been a historic first,” said Cunningham, a professor of theology and director of the Institute for Jewish-Catholic Relations of Saint Joseph’s University in Philadelphia.

Rev. Norbert Hoffman, who appeared at the press conference and along with Cardinal Kurt Koch compiled the first draft of the document, agreed that the document “is aimed primarily at those who are active in this dialogue”—that is, “Catholic theologians engaged for a long time in Jewish-Catholic dialogue.”

“However, it may also be useful to those interested, more generally, in Jewish-Catholic relations,” Hoffman said.

Cardinal Koch said at the press conference that the text is not official Church doctrine, but rather “a study document of our Commission, whose aim is to deepen the theological dimension of the Catholic-Jewish dialogue…[and] to provide inspiration and stimulation for further theological discussions.”

The three primary topics addressed in the document are the “old” covenant, salvation, and evangelization. “Reflection” completely rejects the theology known as supersessionism, or replacement theology, and affirms that God’s “new” covenant for Christians does not negate the “old” covenant with Jews.

“The document sees Christianity as in continuity with biblical Israel, and indeed as ‘fulfilling’ terms of Israel’s covenanting, but, again, not in the sense of rendering Jewish covenantal life or Jewish traditions as obsolete or antiquated. It doesn’t define exactly what it means by ‘fulfillment,’” said Cunningham.

Kessler, however, warned that “fulfillment easily slides into replacement [theology], and substitution theory is alive and well in the pews.” He added that he welcomes “further reflection” on what exactly the document means by fulfillment “in terms of relations with Judaism and how we can ensure the transformation in relations is not limited to the elite, but extends from the citadels of the Vatican to the pews of the Church, as well as from the offices of the chief rabbis to the floors of our synagogues.”

The document also addresses “the thorny issue of how to understand the fact that Jews are saved without believing explicitly in Jesus Christ as the Messiah of Israel and Son of God,” Koch said.

Cunningham said that “without ever exactly defining ‘salvation,’ the document makes it clear that Jews [are in a] covenant with a saving God.”

“It also asserts that Christ is involved in the salvation of all people, which in a mysterious way also applies to Jews,” he said, noting how this does not mean that Jews must be baptized to be “saved.”

Regarding evangelism, the text says that the Catholic Church “neither conducts nor supports any specific institutional mission work directed towards Jews,” though Christians are still called on to “bear witness to the faith.”

Cunningham said that broadly speaking, Catholics “understand ‘evangelization’ to include any activity that spreads the ‘good news’ of Christ and prepares the way for the coming of the reign of God.” According to this understanding, evangelization can include proselytization, but can also include many other activities such as interfaith dialogue.

The Vatican document, continued Cunningham, “states that the way Catholics should evangelize Jews is by giving witness to their faith in Christ, but in the context of interreligious dialogue. Dialogue by definition does not seek to ‘convert’ the other, or to persuade the other to adopt the convictions of their conversation partner. Dialogue between Catholics and Jews is an exchange of their different experiences of God.”

Years of interfaith discourse have resulted in a reevaluation of theological matters such as the “old” covenant, salvation, and evangelism in Catholicism, opening the door for new possibilities in Jewish-Catholic relations.

“Let me express my particular appreciation for the document’s emphasis on the responsibility of educational institutions, particularly [those for] the training of priests, [to] integrate into their curricula both Nostra Aetate and the subsequent documents of the Holy See regarding the implementation of the Conciliar declaration….Arguably, this remains the most notable challenge in taking the achievements from their Olympian heights down to the grassroots [level] universally,” AJC’s Rosen said.

Betty Ehrenberg, executive director for the World Jewish Congress in North America, told JNS.org that the Vatican document “represents the fruits of a productive longterm dialogue between the Catholic and Jewish communities” and “reflects the development of a mutual understanding that did not exist 50 years ago.”

“The fact that the document asserts that the Torah serves as the instruction for Jewish life and that there should be no missionizing to the Jews are statements, in addition to others in the paper, that our community has long waited to hear,” said Ehrenberg, who has worked extensively with the Vatican on Jewish-Catholic relations.

“In the course of our 40-year dialogue,” she said, “there were many ups and downs, yet we persisted in our unrelenting efforts to speak to one another and to forge a relationship. This important Vatican paper represents our mutual determination to find those common threads that bind people of faith. This is a very important moment in our shared history.”