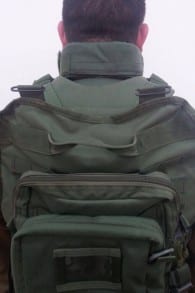 The IDF is set to distribute a newly-designed neck armor aimed at protecting soldiers against the stabbing terror attacks which have been plaguing the country in recent months.

The army’s Logistics and Technology Directorate began developing the armor in November, at the request of the IDF’s Central Command, after Palestinian terrorists began a campaign of knife attacks against Israeli soldiers, security personnel and civilians which have killed dozens and injured hundreds more.

Most of the neck armor will be given to soldiers serving in Judea and Samaria, where the attacks are especially prevalent. Hebron has become somewhat of a flashpoint for the violence, with dozens of stabbing attacks and attempts taking place almost daily.

Though IDF soldiers are mostly protected from the attacks by their gear, which includes helmets and ceramic bulletproof vests, one particularly sensitive spot – the neck – remains exposed.

Lt. Col. Liron Segel runs the Logistics and Technology unit which developed the new gear. The unit, called the Personal Protection and Equipment Department, faced the unique challenge of creating a protective device which would  “strike a balance between the amount of area protected and comfort of the soldier,” Segal said.

The unit worked together with the IDF Chief Medical Officer to develop a protective guard which would be both comfortable and effective. The end product is worn beneath the soldier’s regular protective vest and is constructed of a special kind of fabric and a classified design using “special materials.”

Segal explained, “On the one hand we put an emphasis on materials that are very durable in order to protect against a penetrating wound, while on the other hand we worried about comfort.”

He said that the unit has managed to make a neck guard which is “flexible, thin and even its weight on your neck is not comparatively that heavy.”

The neck guard has already been through field tests and will be distributed to forces serving in the most dangerous areas of Judea and Samaria within the coming weeks. Those areas include locations which have seen the highest number of stabbing attacks against soldiers: Hebron, the Gush Etzion Junction, and Hawara and Tapuach.

While the IDF did not divulge which companies would be producing the neck armor, Segal assured the public that the protective gear is “made in Israel.”