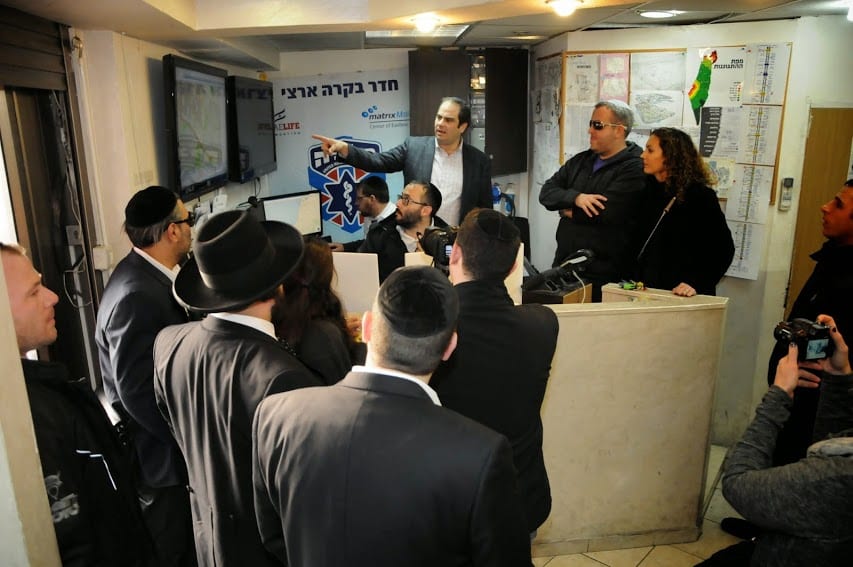 In Jewish communities around the world, the organization Hatzalah (which means “rescue” or “relief” in Hebrew‎) is equated with “life savers”. Hatzalah is a volunteer Emergency Medical Service (EMS) organization known for their speedy response time when arriving to an emergency.

The original Hatzalah EMS was founded in New York in the late 1960s to improve rapid emergency medical response. The largest Hatzalah branch worldwide is Israel’s United Hatzalah. Founded in 2006 following the Second Lebanon War, it was established when the need to improve the unified central rescue response became clear.

With Israel’s continuous terror attacks and population expansion, United Hatzalah urgently needs to upgrade its life-saving capabilities. Build Up Israel, an organization which raises funds for important projects in the Holy Land, recently visited the cramped United Hatzalah building in the center of Jerusalem and joined forces to raise funds to expand and update the agency.

“Seeing 15 volunteer staff jammed into one small room answering non-stop phone calls made it clear that we had to do all we could to improve the working environment of United Hatzalah,” Gabi Sackett, Project Manager for Build Up Israel, told Breaking Israel News.

People all over Israel count on United Hatzalah in an emergency. The organization responds to more than 211,000 calls per year throughout the Holy Land. Their response time is recorded at under three minutes.

Realizing the sooner medics arrive the greater the chance for the patient to live, United Hatzalah medics speed by traffic using an ambucycle, a specially outfitted motorcycle with life-saving equipment. It contains everything an ambulance has to treat patients except the bed. This allows emergency medical staff to bypass traffic and arrive at emergencies within minutes.

The organization also has a unique working model. United Hatzalah has over 3,000 volunteers throughout Israel. “They are practically in every community,” explained Sackett to Breaking Israel News. “When a call goes out, any time of day or night, members respond via handheld radios. They are the first to get to patients. By the time the standard ambulance arrives, the Hatzalah medic has usually stabilized the patient.”

With Israel’s distinct population and constant barrage of terror, volunteers are from all sectors of Israeli society – secular, religious, male, female, Jewish, Arab, and Christian. They are medics, paramedics and doctors. All emergency calls are responded to and treated regardless of religion, ethnicity, or gender.

Additionally, due to United Hatzalah’s volunteers serving where they live, study and work, crews are on call 24/7 with members responding from wherever they are, no matter what they are doing. Their rapid medical treatment saves thousands of lives each year across Israel.

United Hatzalah’s call center is presently being stretched to its maximum capacity. Sackett pointed out to Breaking Israel News that a victim in critical condition has a 7-10 percent reduced chance of survival for every minute that passes without defibrillation and advanced life support intervention. “We must help get the United Hatzalah’s building up to speed, especially its call center, in order to avoid delays in getting to patients,” he noted.

The call center responds to over 800 emergency calls a day of which approximately 25 percent are critical lifesaving situations. With the new call center, organizers will be able to shave the average response time to just 90 seconds, saving countless lives in the process.

The Israeli government provides limited funding to United Hatzalah and local municipalities give project related support. The majority of United Hatzalah‘s funding, including its equipment, comes from individuals and foundations in Israel and internationally.

“United Hatzalah must expand its quarters in order to save more lives,” Sackett told Breaking Israel News. “With the constant knife and car ramming terrorist attacks, Israel needs to be as efficient and hi-tech as possible to help people. The ‘Donor Dedication Area’ is set to go,” he noted.

The existing center was established when United Hatzalah was handling two thirds less calls annually than it does today. The new command center will be among the most advanced dispatch centers in the world designed to function during a war, natural disaster, terror attack or civilian MCI (Mass Casualty Incident). International rescue organizations will base their structures on the upgraded United Hatzalah building.