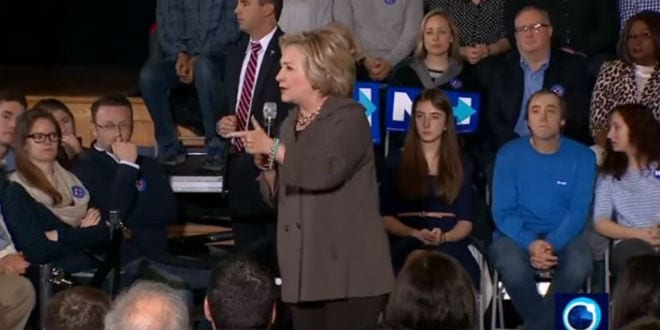 Clinton said of the mass execution, which took place on Saturday, “Clearly this raises serious questions that we have to raise directly with the Saudi government.”

She spoke of the issue in a town hall meeting after being asked how she would handle the situation as president. “We have governments we work with on a number of issues that the US works with many governments whose policies and values are antithetical to ours, to be just blunt about it,” she said.

But, she added, these countries “also have certain interests with us that we are involved in,” creating the need for diplomatic delicacy.

Nevertheless, she said she was willing to criticize Saudi Arabia publicly, saying, “I think that even our friends who we work with on so many areas should not be immune from our criticism and our questions about rule of law about their treatment of minorities.”

She warned that the execution of the cleric “would inflame the region even more” and “cause even more dissent and more upheaval within Saudi Arabia.”

“I don’t think it was a smart decision for them to make,” she added.

The execution has sparked an escalating tumult in the region which culminated on Sunday in Saudi Arabia officially cutting ties with Iran.

Saudi Arabia said that those executed were terrorists involved in a series of al-Qaeda attacks between 2003 and 2006. The killing of Nimr al-Nimr was immediately condemned by Iran.

Demonstrators in Tehran stormed the Saudi Embassy on Saturday night in protest, setting the building on fire with Molotov cocktails. In response, Saudi Arabia announced on Sunday that it was severing its diplomatic ties with Iran and demanded that Iran remove all of its diplomatic staff from Saudi Arabia within 48 hours.