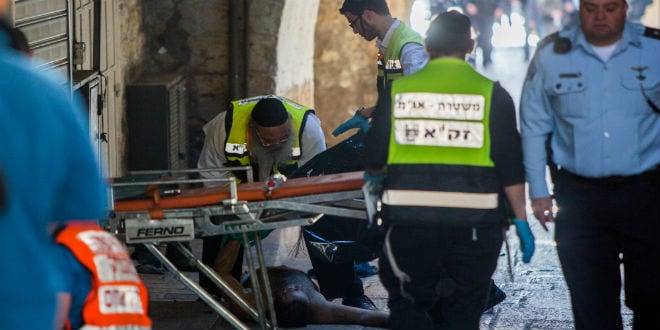 The wave of violence that began last year has continued into the year 2016. It has so far resulted in the deaths of 26 Israelis and in over 500 injuries.

Israeli authorities consider the escalation in terrorist attacks across Israel to have begun on September 13, the eve of the Jewish New Year, with the murder of Alexander Levlovich by five Palestinian stone throwers from Sur Baher.

“We can indeed see an escalation in violence on every Jewish New Year holiday around September as we have seen this year,”  Dr. Shaul Bartal of the Middle East Department at Bar Ilan University told Tazpit Press Service (TPS) last September.

High-ranking security officials in the Israel Defense Forces and Ministry of Defense estimated then that the escalation would last only a few weeks at most.

However, Israel Police and Magen David Adom (MDA) statistics combined with data compiled by TPS based on real-time security incident monitoring shed light on this ongoing escalation with figures that show that the violence began before the Jewish New Year and will not end anytime soon.

TPS reviewed incidents spanning the entirety of 2015, including three attacks in April and June that resulted in the murders of Danny Gonen, Shalom Sherki, and Malachi Rosenfeld. These attacks had occurred before what is now considered the beginning of the so-called “Knife Intifada.”

Over 3,500 attacks were committed by Palestinians and an additional 120 attacks were perpetrated by Israeli Arabs over the year 2015.

These attacks claimed the lives of 26 civilians, including victims who died at a later date as a result of the attack. Over 70% of the those targeted have been Jewish civilians.

Out of 503 attack victims who have sustained various degrees of injury, 271 were injured in the attacks of the last four months.

While the most commonly used method of attack remains stone throwing, which has been the method used in over 1,500 attacks, the “Knife Intifada” has taken its name from the sharp increase in stabbing attacks with more than 150 stabbing attacks committed in 2015.

Additionally, over 30 vehicular terror attacks were chronicled in the year 2015.