Trump: I Wouldn’t Rule Out Spying on Israel – Israel News 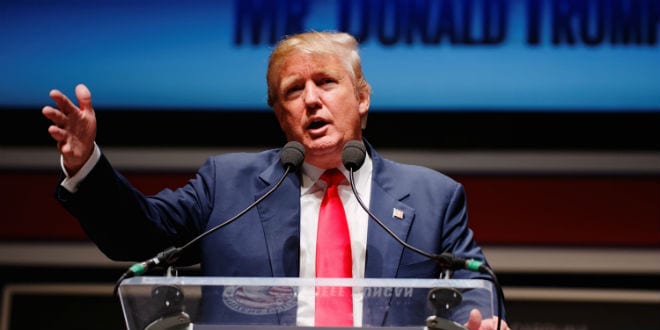 Frontrunner Republican presidential candidate Donald Trump said on Sunday that he would not rule out the possibility of spying on Israel if he were elected president.

An interviewer on CBS’s “Face the Nation” asked Trump to respond to recent reports that the National Security Agency (NSA) had continued to spy on Israeli Prime Minister Benjamin Netanyahu two years after US President Barack Obama announced that the US would halt spying on friendly world leaders.

When asked if he would be willing to spy on Israel, Trump replied that while he “would certainly not want to do it”, he would also not rule it out, instead opting to “leave open possibilities” of taking any actions necessary to “make our country great”.

The Wall Street Journal broke the spying story last Tuesday, reporting that the NSA, under the Obama administration, had continued to spy on Netanyahu and other top Israeli officials in order to glean intelligence on Israel’s campaign against the Iran nuclear deal, signed last year.

According to the report, the White House instructed the NSA to listen in on Netanyahu’s conversations with US lawmakers and Jewish American leaders so that Obama could monitor what steps Israeli and Jewish policymakers were taking against the Iran deal, which was negotiated by Secretary of State John Kerry and strongly pushed by Obama.

As for Obama’s 2013 promise to curb spying on allies, a senior US administration official scoffed at the prospect of halting intelligence gathering on Netanyahu and Israel, indicating that while Obama would be willing to stop spying on others, he wouldn’t include Netanyahu in that list.

“Going dark on Bibi? Of course we wouldn’t do that,” the official said, according to the Wall Street Journal.

Israeli lawmakers responded to the report angrily. Transportation and Intelligence Minister Yisrael Katz called for the Israeli government to take steps against the spying, saying, “If the information that was published is shown to be true, Israel should submit an official protest to the American administration, and demand that it stop all activity of this sort.”