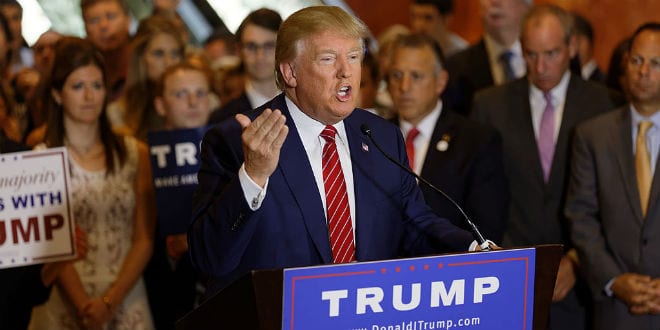 The video shows a clip from a Trump speech in which the famously blunt multimillionaire called for a measure banning all Muslims from entering the US. The comment raised media outrage throughout the world.

In the speech, made after a radical Islamist couple killed 14 in a shooting attack in California, Trump advocated a “total and complete shutdown” of Muslims coming into the US, at least until the US was able to “determine and understand this problem” of Islamic violence.

Shabab used the clip to encourage youths to the West to wage jihad. Previous to Trump’s clip, the video shows a speech by Anwar al-Awlaki, an American-born radical imam killed in a US drone strike in September 2011, in which the imam called on American Muslims to “flee the oppressive Western atmosphere for the lands of Islam.”

The 50-minute video uses footage of Malcolm X, protests against police actions, and the speeches of white supremacists to encourage black youths to convert to Islam and travel to Somalia in order to join the fight against the West.

The video, which was posted to Twitter, makes the claim that Muslims are mistreated in the US, stating that “basic human rights and concepts such as justice, tolerance, and the rule of law do not apply if you are a Muslim”, and using Trump’s clip as proof of American hatred towards Muslims.

The recruiting video comes after Democratic presidential candidate Hillary Clinton said in a debate last month that Trump was “ISIS’s best recruiter” because of his inflammatory remarks about Muslims and Islam.

However, her claims that radical jihadists were “going to people showing videos of Donald Trump insulting Islam and Muslims in order to recruit more radical jihadists” and that Trump’s speeches were “being used in social media by ISIS as propaganda…to help recruiting” went unsubstantiated at the time.