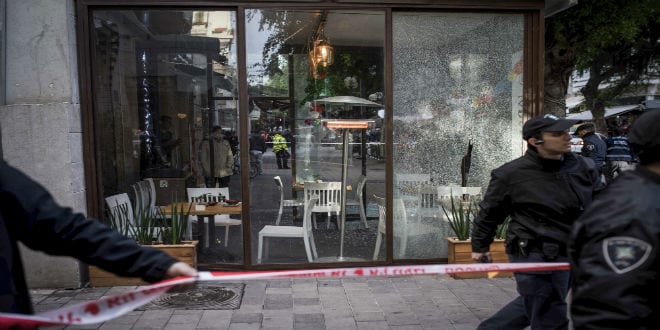 Security was tightened at schools and municipal facilities on Sunday morning in Tel Aviv as the search for the Palestinian gunman who opened fire in a bar on the city’s central Dizengoff Street on Friday afternoon, killing two and injuring seven, continues.

The gunman has been identified as Nashat Milhem, a 29-year-old Israeli Arab resident of Arara, a village in Wadi Ara in northern Israel. He previously served a five-year prison sentence in Israel for a 2007 attack on a soldier.

On Friday afternoon around 2:30, Milhem entered the Simta bar on Dizengoff street with a sub-machine gun, reportedly stolen from the safe of his father, a volunteer police officer, and began shooting. Alon Bakal, 26, the manager of the bar, and Shimon Ruimi, 30, who was in the bar celebrating a friend’s birthday, were killed.

Two other victims were seriously wounded, but their condition was reported as stable, while the rest of the wounded received light injuries.

Milhem escaped with his gun, and has not yet been found. Security officials suspect that he also killed a taxi driver in north Tel Aviv, who was found dead of gunshot wounds about an hour after the Dizengoff shooting.

The Tel Aviv-Jaffa municipality said that extra security forces would be deployed around schools, kindergartens, and crowded areas, though the mayor also made a statement saying that parents could keep their kids home from school if they chose.

The shooter was identified by his father, Muhammad, who recognized his son in television footage of the attack and immediately contacted authorities. He was questioned by police on Friday evening, and computers were seized from the family home as part of the police investigation of the attack.

Muhammad told reporters on Saturday that he was horrified by his son’s actions. “I am an Israeli citizen, a law-abiding citizen. I heard what my son has done, and I am sorry,” he said. “I did not educate him to act in that way. I went to the police and helped the security forces. I did not expect that my son would do such a thing.”

He said that he hoped police would soon catch him, warning, “Just as he murdered two people, he can murder more.” He added that he wanted to “hear that he is in police hands”.

Muhammad expressed sorrow for the victims and said he hoped the wounded would make full recoveries. He also said that his son had “psychological issues”.

Posted by The Israel Project on Friday, January 1, 2016

The local council in the Milhems’ village, Arara, released a statement “harshly condemning” the shooting incident. The council stressed “that the incident is alien to our culture and the culture of the village.”

Israeli Prime Minister Benjamin Netanyahu visited the site of the attack on Friday evening and vowed to find and destroy “pockets of lawlessness” in Israel’s Arab sector.

“Whoever wants to be Israeli must be fully Israeli — both in rights and in obligations,” he said. “And the first and paramount obligation is to abide by the laws of the state.”