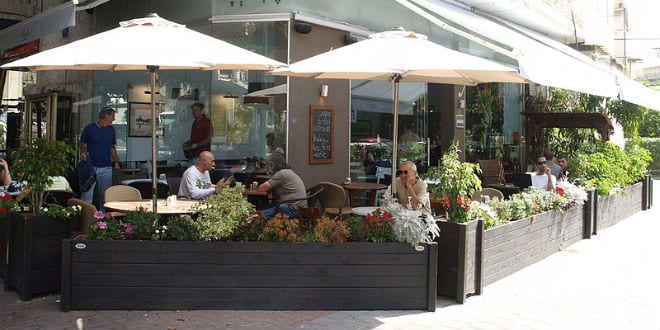 Police are still searching for the armed terrorist who killed two and injured seven, two seriously, in an attack on Dizengoff Street in Tel Aviv on Friday. Just before 3:00 pm, the attacker stepped onto the street and began spraying bullets from an automatic weapon into shops and restaurants.

Alon Barkal, 26, and Shimon Ruimi, 30, were killed in the sidewalk shooting attack.

The Palestinian terrorist was identified by his father who recognized him from the televised security videos. His name has not been released, but he has been identified as a 29 year old Arab from the village of Arara in the Wadi Ara region in the north of Israel. His father, a security guard and police volunteer, reported his son to the police. Channel 2 reported that he had been jailed for five years when, in 2007, he stabbed a soldier with a screwdriver and tried to steal his weapon. It was reported in Haaretz that he stole the gun used in the attack from his father.

YNet reported his father turned to police in fear his son would continue to kill Israelis.

“What is important to me now is that they reach my son and arrest him, because he is still armed,” the Ynet news website quoted him as saying. “And just as he murdered two people, he can murder more.”

At a press conference on Friday night, Public Security Minister Gilad Erdan refused to give details of the ongoing search and investigation into the attack, refusing to confirm that it was a terror attack with nationalist motives, despite a Koran being found in the attacker’s backpack.

Police sources announced their belief the terrorist is still in Tel Aviv.

The Arara village council issued a statement condemning the attack.

“The council and villagers harshly condemn the shooting incident that occurred on Dizengoff Street in Tel Aviv on Friday afternoon, and strongly oppose any acts of violence. The council makes clear that this is the action of one man and is not representative of the village, and stresses that the incident is alien to our culture and the culture of the village.”