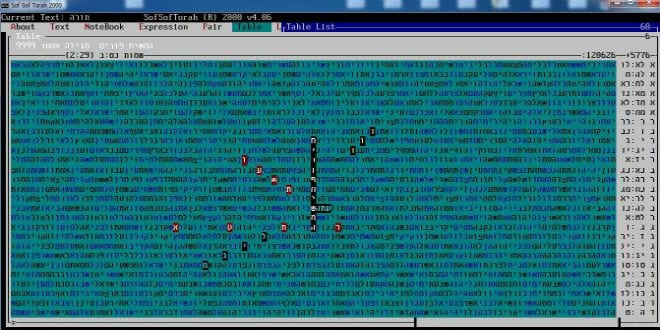 In a new video, word renowned Bible Codes expert Rabbi Mattityahu Glazerson revealed yet another connection between the upcoming year of 2016 and the arrival of the Messiah.

Glazerson opens the video by reviewing Genesis 49:1, a verse that was read in synagogues all around the world last week. In this verse, our forefather Jacob is lying on his deathbed. He calls all his sons together in order to share with them what he knows about the End of Days.

“And Jacob called unto his sons, and said: ‘Gather yourselves together, that I may tell you that which shall befall you in the end of days.’”

Since every Hebrew letter has a numerical value, there is a whole system of studying hidden meanings in Hebrew texts by calculating their numerical values. This system is known as gematria. Based on a text in the Zohar, the primary text of Judaism’s mystical tradition, Glazerson calculates the gematria (the numerical value) of the two Hebrew words from Genesis 49:1 that mean “shall befall you” to be 772.

According to Glazerson, the Zohar says that, even though Jacob was prohibited by Heaven from revealing what he knew about when redemption would come, there is an indication hidden in the verse itself.

The gematria 772 corresponds to the Hebrew year 5772 which was 2011-2012. In the video, Glazerson says, “But apparently, we did not have the conditions, repentance and faith, and this is why he did not come,” in that auspicious year.

Nevertheless, there are still other auspicious times based on this verse. Glazerson points out that the Hebrew year 5775 (2014-2015) which was a sabbatical year, “also had clear indications that it could be [the year of] the Moshiach (Messiah),” but again, the necessary conditions of repentance were not fulfilled.

Since gematria can be calculated using several different formulas, Glazerson concludes that this verse could also be hinting to the current Hebrew year of 5776 which began at sundown on September 13, 2015. Some believe that the current year is also a Jubilee year, adding Biblical significance to the timing.

Speaking to Breaking Israel News, Glazerson said the auspiciousness of this year is enhanced by a different table in which he found something he says “statistically is one to millions.”  In this table, he found the sentence “HaMoshiach Purim” (the Messiah in Purim) which, says Glazerson, appears only “once in the Torah in a skip of 5776 letters.” This is significant because this coming holiday of Purim (which begins at sundown on March 23, 2016) will be the Purim of the Hebrew year 5776.

At the 3:26 mark, Glazerson turns his attention to the Bible Codes table from the Book of Genesis that includes verse 49:1.

In this table, he finds codes for a number of messianic concepts, including Ben Yishai (son of Yishai) which is a clear reference to King David from whom the Messiah son of David is descended. Significantly, the Hebrew words Ben Yishai intersect with the full verse from Genesis 49:1.

Glazerson also found the code for Moshiach intersecting with the Hebrew letters that refer to this year. Finally, he points out that the Hebrew name of Eliyahu (Elijah the prophet) who is destined to announce the arrival of the Messiah, also intersects with the letters referring to the current Hebrew year.

Glazerson ends the video optimistically.  Although there have been promising findings in gematria and Bible Codes about previous years and we have not yet merited it, there are encouraging signs that 2016 will yet be the year in which the entire world will greet the Messiah.