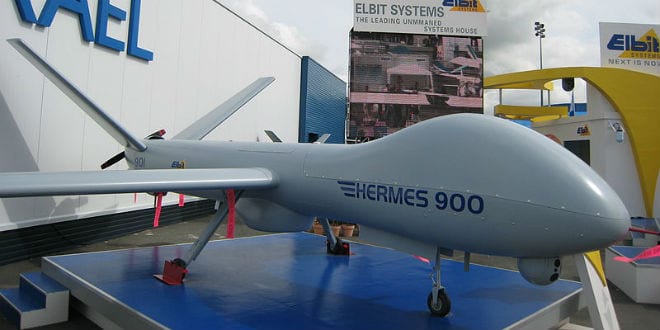 The Israeli Air Force’s military drones are undergoing a series of state-of-the art upgrades which will enhance their capabilities for anti-terror tracking to “unprecedented” levels, said a senior official from Elbit Systems, which produces the Hermes 900 drones.

The drones have become an intrinsic part of how the IDF operates against terror. The IDF put the drones into operation before 2014’s Operation Protective Edge, using them for the first time against Hamas and Islamic Jihad. The drones proved so useful that the IDF has since incorporated them into most of its order of battle.

Currently, the Hermes 900 drones are capable of carrying a wide range of intelligence-gathering payloads. Elad Aharonson, an executive at Elbit Systems, said that the company is now “developing the next generation of capabilities with the defense establishment. Naturally, we try to stay a step ahead of the other side.”

Specific details of the drones’ capabilities must remain classified, but Elbit said that the upgrades will help the IDF adapt to ever-changing terror threats. The guerilla-type terror carried out by individual terror organizations requires a different kind of military approach than more conventional warfare. The Hermes 900 will be adapted to the IDF’s need to monitor guerilla-terrorist targets that disappear within minutes.

“There is a difference between preparing for war with the Syria military six years ago, and dealing with terror organizations today, whether it’s threats in Syria, Lebanon, Gaza or [the] Sinai [Peninsula],” Aharonson pointed out. “The latter threats have difference characteristics. They hide.”

The new drones will offer unprecedented options, such as using a single technological platform to track signals, visual and thermal images, and radar signature.

The Israeli-made drones have already been purchased by foreign governments. Switzerland bought six this year, and Elbit says that it sold several others to a Latin American client.

Aharonson described the design process of the drones as incorporating “multiple-layer intelligence” coming from different divisions within the company. The methods employed, he said, have a “much higher chance” of locking in on targets.

He added, “There is technology here that look like science fiction.”