Iran Ships Out 25,000 Pounds of Enriched Uranium – to Russia

Home » Iran Ships Out 25,000 Pounds of Enriched Uranium – to Russia 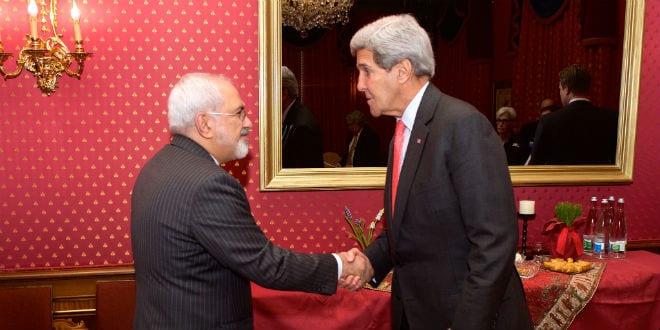 As 25,000 pounds of enriched uranium are shipped out of Iran, US Secretary of State John Kerry said on Monday that there have been “indications of significant progress towards Iran completing its key nuclear commitments.”

His statement said that Iran had sent most of its enriched uranium, a material necessary for the making of nuclear bombs, to Russia. The step brings Iran closer to meeting the obligations imposed by the Iran deal.

Kerry described the Iran deal, which Israel categorically opposed, as “truly one of our most important accomplishments of 2015.” The deal will lift economic sanctions on Iran in return for a curtailing of Iran’s nuclear activities. However, its restrictions will last only ten years, after which critics of the deal say Iran will be poised to build nuclear weapons.

One of the requirements of the deal is that Iran will possess no more than 300 kilograms of low-enriched uranium by “Implementation Day”, which is the stage of the Iran deal at which its obligations are considered fulfilled and sanctions against the country will be lifted. Iran is expected to reach that stage within the next few weeks.

Kerry said that shipping out the uranium will lengthen Iran’s potential breakout time – the time in which it could build a viable nuclear weapon. “The shipment today more than triples our previous 2-3 month breakout timeline for Iran to acquire enough weapons grade uranium for one weapon, and is an important piece of the technical equation that ensures an eventual breakout time of at least one year by Implementation Day,” his statement asserted.

In return for the enriched uranium, Russia sent Iran about 137 tons of minimally processed yellowcake uranium. Kerry also revealed that Kazakhstan is helping to facilitate the transfer and had provided Iran with natural uranium material, paid for by Norway.

In order to reach Implementation Day, the International Atomic Energy Agency (IAEA) has to verify that Iran’s stockpile of enriched uranium is 300 kilograms or less. Iran must also remove key parts of its uranium enrichment infrastructure and disable its heavy water reactor.