Life or Death? Israeli Rabbis Split Over How to Treat Terrorists

Home » Life or Death? Israeli Rabbis Split Over How to Treat Terrorists 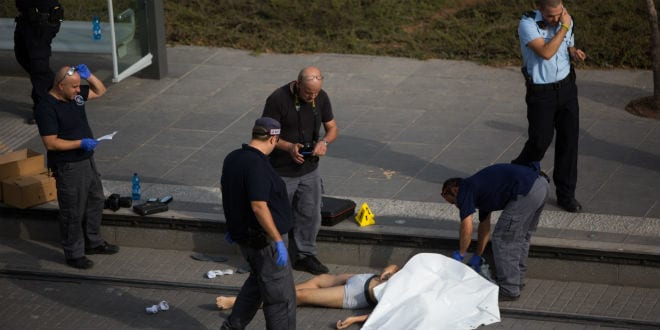 As Israel is in the grips of what has become daily Palestinian terror attacks, Jewish leaders are split over how to view and treat the terrorists perpetrators. The debate has been heightened over the recent release of new guidelines by the Israel Medical Association (IMA), which instruct medical and emergency personnel to treat the injured at the scene of a terror attack based on seriousness of injuries, regardless if the patient is a terrorist or victim.

In October, the Tzohar Rabbinical Association ruled that a terrorist who has been injured and no longer poses immediate danger should not be harmed after committing a murderous attack.

Rabbi David Stav, Chairman of Tzohar, explained the organization’s position: “In these days in which the blood is boiling… it is important to preserve our moral superiority; (we should) not harm those involved in murderous acts who have already been neutralized and do not represent a threat.”

The Chief Rabbi of Safed and Chief Rabbinate member, Rabbi Shmuel Eliyahu, disagreed. He shocked many by ruling that according to Torah law, captured terrorists must not be kept alive. Police officers should not give the terrorist a chance to lower his weapon but should open fire immediately with the intention to kill. The rabbi added that those policemen who did not do so should be prosecuted.

Rabbi Eliyahu felt the rabbis in Tzohar were “forgetting Jewish law” because “they are only interested in looking good to non-Jews.”

“We can’t be consumed all day with what others are thinking about us,” Rabbi Eliyahu admonished. “This is Jewish law: If the court does not avenge the blood, then an individual can avenge the blood.”

Rabbi Eliyahu called for the Israeli courts to institute the death penalty for terrorists, saying recently: “We must not allow terrorists to survive their attacks. If you leave him alive, there is a fear that he will be released and kill other people.”

The death penalty is permitted by Israeli law but has only been invoked once against Nazi SS officer Adolf Eichmann in 1962.

The fear of imprisoned terrorists being released to attack again is very real. Israel has released a total of more than 7,000 Palestinian prisoners in exchange for 19 Israelis and the bodies of eight others, most notably in the 2011 exchange for Gilad Shalit, when they released 1,027 convicted Palestinians, some of whom went on to kill more Israelis.

Similar to Rabbi Eliyahu’s statement, several other prominent Israeli rabbis have come out in support of taking a harsher stance against terrorists.

Rabbi Meir Mazuz, one of the most senior rabbis in the Sephardic world, recently ruled that it is an “obligation for Jews to kill terrorists before they kill us.”

“When faced with a cruel enemy, they must be treated in a like manner. We cannot pity them, because they will not pity us,” he said. “At this time, as Jewish blood is being spilled, we have an obligation to rise up and kill those who seek to kill us before they have an opportunity to do so.”

In agreement with Rabbi Eliyahu, Rabbi Mazuz called for instituting the death penalty for terrorists. “The authorities are responsible for ending this murder, for instilling fear in the hearts of terrorists and destroying their ability to act. We demand that the government fulfill their obligation.”

Rabbi Yaakov Ariel, Chief Rabbi of Ramat Gan, ruled that it is only permitted to kill a terrorist so long as he poses a threat. “If the danger has passed and the terrorist is restrained or injured, (we) must act wisely, judiciously and not through spontaneous emotion,” he stated. “The commandment to avenge blood is a major commandment in Islam; there is no need to add fuel to the fire. Death does not necessarily deter, since the one killed is typically portrayed as a shahid (martyr). It needs to be evaluated with security experts.”

Rabbi Shlomo Aviner, head of the Ateret Yerushalayim Yeshiva in Jerusalem and the rabbi of the city of  Bet El, ruled that terrorists must be killed instead of arrested, saying, “It is forbidden to say, ‘Death to the Arabs’, but we must say, ‘Death to terrorists’.”

Rabbi Yitzchak Brand, a respected Jewish legal authority from the city of Emannuel, argues that since the Palestinian terrorists are trying to kill Jews, it is a wartime setting and usual legal measures no longer apply. He adds that the policy of Magen David Adom, Israel’s EMS unit, to treat a critically-wounded terrorist before a seriously-wounded Jewish victim is yet another reason to kill the terrorist since he may be the cause of the innocent Jew not getting the care he needs, and possibly dying.

Rabbi Dov Lior, Chief Rabbi of Kiryat Arba, ruled that it is permissible to kill a downed terrorist, even after the attack. He reasons that Israel is now in a state of war and Jewish law therefore views the situation differently than in peacetime.

“In normal times, a man who attacks may not be attacked after the knife is taken away. But a terrorist attacks for nationalistic reasons and his target is to kill every Jew, in every place,” he said. “Therefore, this is not viewed as a crime, but rather as a war against all the Jews. Just as a soldier in war is killed without a court first, so should the terrorist be treated, not according to laws dealing with crime, but as in a war. The person being attacked is allowed to respond thus, since the terrorist came at him as if in a war.”